May the Blessings of the Hula Goddess be upon you!

One of my players couldn't make the first session of our Mutant Future game, you know the one-shot that has now gone on for three sessions : ) So I worked him into the second session (summary of that one to follow soon, I hope) anyways I thought I would give you his background just to add a bit more info for those of you who might be interested in our Campaign. 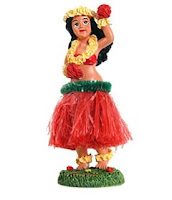 The below events took place during the events of session 1.
Natorg (pronounced NAY-torg) listened intently to the trader's words... while he couldn't see him very well (with his diminished eyesight he couldn't see much beyond 50') his ears were fine, some would say even better than most. "Red Spotted Fever had broken out over in JymsWard and everyone knows you die from that. To make things worse a Healer that went to help was kidnapped by The Goatlords! Yeah, JymsWard  was in a bad way, shame theres some decent folks livun there". Natorg wondered what toast was for a bit, but cast the thought aside as he made up his mind, he knew where the Goatlords lived, it wasn't that far away actually, if you took the right tunnels, he'd slip in and maybe just maybe he could rescue the Healer! He'd be a hero, and then maybe his people would let him sit at the fireside and share the choice cuts of rat meat and fungi bread! He couldn't help that his skin was deadly poison to most, why they held it against him, he just couldn't understand.
Natorg geared up, made sure his latex yellow gloves were intact and untorn (wouldn't want to accidentally poison the healer!), the moto sickle helm handed down from his grandfather on his head complete with his sell fone com unit headset (Hork said it was broken, but what did that idiot know, the hula goddess said he was jealous and the hula goddess was always right), he made sure the pride of his possessions the sacred, blessed hula goddess was securely fixed atop his moto sicle helm. Natorg prayed to her and she talked to him through the sell fone. Yes this was the right decision. He strapped on his short sword, (the others wouldn't let him have anything better than that) and headed out for adventure!! 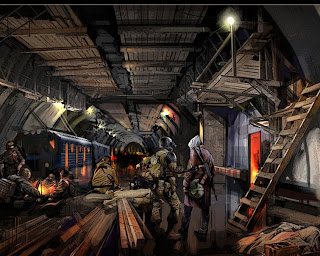 Ghetto Hall
Several days travel to the west of Gaxville beyond The Mazes and "safely" below the eyes of the various gangs and mutant monsters that fight for control of the ruins above lies Ghetto Hall, a small underground community of mutant humans, although calling it a community is a bit of a stretch, the community is located in an old tunnel of the ancients (fortunately if the tunnel ever connected to Trog Territory that section has long since collapsed). They survive by fungi farming, and supplement their diet with any rats, and insects that they can catch. On rare occasions a trader will stop in to see if these tunnel dwellers have uncovered any bit of useful tech for trade. Unknown to most the community also has a water supply that is only "partially" polluted.  The "Leader" of Ghetto Hall is Hork the Hairy, leader mostly because he is the biggest and strongest, he proclaims his undying love for the mutant female Scaleface, although she thus far has done nothing to encourage his advances.  Scaleface is popular with the tunnel's denizens, should she ever agree to become Hork's bride that could change things in Ghetto Hall dramatically.

I worked up Ghetto Hall and the info about it, however gotta give my buddy Michael credit, he worked up his character concept (including worshipping the hula goddess via his broken cell phone) on the spot from the random gear that I had him roll for, I use some crazy tables to see what kind of stuff they have just to add to the feel of the game.
Good Gaming -B
Posted by Brutorz Bill at 12:26 AM