Here is the continuation of my Rogue Space game from Saturday evening.
If you missed part 1 you can check it out HERE.
The continuing adventures of Jupiter Zeus; Space Simian


.....He approached her, offered to buy her a drink and… (Rolled maximum possible results on his Empathy/Persuasion rolls!) Suffice to say, Jupiter didn't have to worry about needing a room for the night.  The next morning he woke up swimmy headed and feeling a bit weird.  The Aelfar woman was gone..what was her name again?  He remembered her saying something about tracking down The Merciless Mang… that was one mean S.O.B. He knew of him... the human warlord usually had android guards, drones and such around him at all times.  Now for some reason Jupiter felt the need to track that bastard down and take him out.  What the hell?!  He also somehow knew that Mang would be on Tarlkin's Landing in three days and would be lightly guarded.  Checking his pocket he found a low passage ticket indicating he had booked and paid for passage to Tarlkin's Landing…WTF?!  Oh well nothing to do now but see it through.


Tarlkin's Landing, three miles outside the "town" of Heretic's Fork.


Jupiter Zeus had acquired a pair of binoggles and a hoverboard from a drug addled local. Wasn't much to this place, pretty much a dried up nowhereville, but he had a job to do.  Not sure how he wound up with this job, was still a little fuzzy about that part. He munched on the snacks he had "borrowed" from a local in town.


Looking out over the dry creek bed just past some red rocks he spotted his quarry. 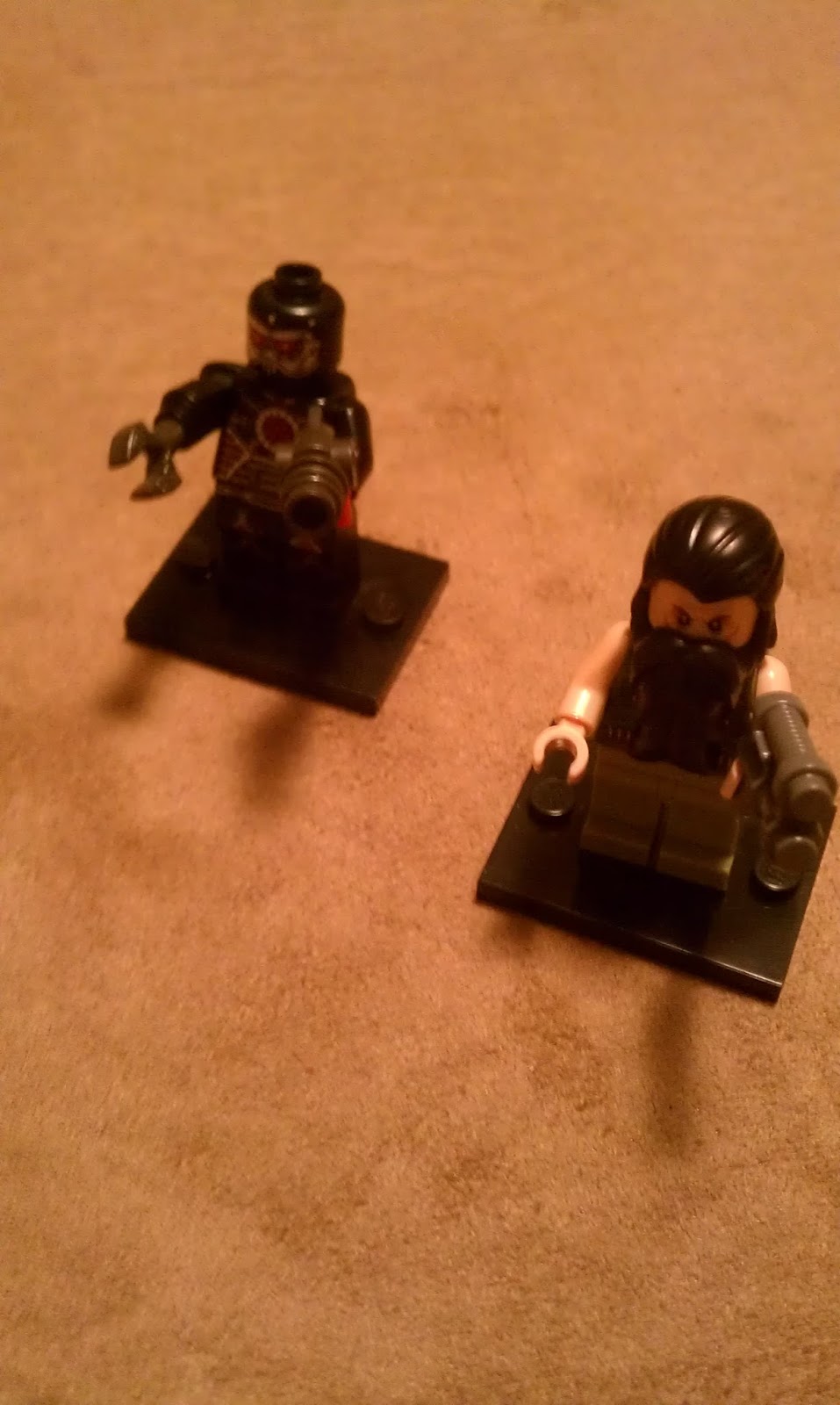 Yep that was definitely Merciless Mang and one of those damn androids of his…looks like one of them Clawtrons.
but not the  "regular" Clawtron 8000's, this one looked tougher.

This job isn't paying enough for this..what the heck is this job paying anyways??
Jupiter failed his acquiring roll to note the drone flying overhead…but the drone had picked up the simians presence and radioed its master.

A Hornet Class Drone, based off of the more common Vulture Series, but faster and nastier!
Jupiter was focused on the two figures crossing the dry creekbed in the distance, and totally missed the other Clawtron 9000 now alerted to his presence by the drone and it set up an ambush.

Fortunately for Jupiter Zeus, the Clawtron 9000 missed, its flamer pistol scorching the rocks near where the gorilla had been hiding.

Both the android and gorilla proved to be closely matched both had high Fighting skills and several rounds of back and forth attack and counter attack ensued.  All the while the drone recorded this from overhead.  Jupiter slightly damaged the Clawtron but its armor deflected most of the damage.  Then the Clawtron scored a blazing hit on Jupiter, the smell of burning fur filled the air, but the gorilla's hide and armor absorbed much of the damage, "THAT HURT!" the ape yelled and tore into the android with his laser pulse rifle, scoring a direct hit and turning the android into a pile of busted gears and circuits. Mang observing the video feed nodding his head, the warlord had learned what he needed and withdrew.


Jupiter Zeus now angry, injured and well mostly angry leapt on the "acquired" hover board and pursued.  "You're not getting away from me that easily!" the ape yelled.  The gorilla was quickly gaining on Mang and the remaining Clawtron, Jupiter fired a shot at them while riding the hover board, but missed wildly.  Then the Hornet Drone struck and launched an electro stinger attack at the hover board.  Jupiter made some crazy rolls and managed to stay aloft, but he couldn't focus on shooting at Mang, it was all he could do to stay aloft on the hoverboard.
Mang had reached his own transport vehicle!

Which was way more heavily armed than anything Jupiter was prepared to take on!


Jupiter spun the hoverboard around and raced in the opposite direction at top speed!  Mang fired a mini-missle at Jupiter, if not for Jupiter's high Fighting skill (and an expenditure of LUCK!) he would have been toast! as it was the hoverboard was fried and he crashed into the rocky hills.  Mang apparently satisfied that the ape was either dead or incapacitated recalled the drone and withdrew from the area.
Jupiter Zeus was hiding under a rock, his pulse rifle was a mess, the hoverboard unrepairable.  He dug out his med kit and patched himself up the best he could. He watched Mang drive off in the distance and vowed he would get revenge on the Warlord.  This whole thing seemed like a setup…
In the meantime he had a long walk back to the Starport ….
Epilogue coming soon...