I know its not Simian Saturday, but it IS Sci Fi Sunday so I thought I'd share the character I worked up for my Rogue Space game last night. 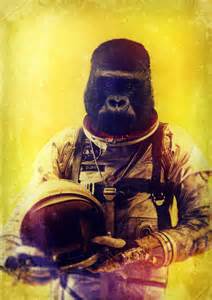 Jupiter Zeus, is a Simian; Gorilla to be precise, in the past he was a Justifier and is one of the rare Justifiers that was able to earn enough creds to pay off his debt to the corporation and earn his freedom (at least that's the story he tells anyways). Some believe him to have been an agent for the Simian Star Empire, something he won't discuss.  He now wanders the Dark Frontier taking on odd jobs (muscle, security, bounty hunting etc.) to get by, his long term plans aren't clear.


Update*  The very talented Steve Zieser just posted a mini-review of Rogue Space and a kickin' illustration of a Space Ape over on his blog.   : )
Posted by Brutorz Bill at 11:51 AM