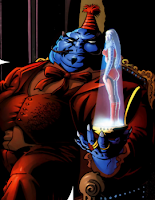 Slavers
Lenses: Gluttony, Greed
Government: various Merchant Houses compete for dominance
Technology Level: 4 (Specialty Genetic Engineering)
Motivation: Profit
Slavers, the original racial name for their people was lost ages ago, are a race of large, extremely obese blue skinned humanoids. For centuries, Slavers have engaged in the slave trade of other sentient races. As they would say, "it's nothing personal, just business". They will work with whomever or whatever will pay their prices, whether it be Badoon, Deonists or worse. They have their greedy fat fingers into all sorts of shady business transactions across the galaxy, but the core of their money making endeavors is the slave trade. In fact many believe they got their start and much of their technological advances from direct dealings with the Deonists, the Slavers being a psionic race (and potential "prey" of the Deonists) opted to make a "deal with the devil" the Deonists, and rather than become victims to these Devils they instead capture and send other psionic races to their doom.
Many clients have special requests, and are willing to pay big money to those that cam meet their requests. To enable them to meet these special requests, the Slavers have engaged in extensive genetic engineering experiments that have enabled them to create special "Hounds" from other races. These hounds are specially designed Trackers sent out after particular quarry, just one more reason for other races to loathe the Slavers. Slavers are also always on the lookout for means to better control their slaves, psi-tech devices and artifacts in particular always draw their interest.
Spending years as "businessmen" has atrophied their physical abilities, indeed Slavers find it beneath them to engage in manual labor, after all, "that's what slaves are for!"…but they have more than made up for it in enhanced intellects and a wily cunning, in fact the majority of Slavers are quite skilled psychics, especially in telepathic pursuits.
SWN Default Settings Note: Slavers have been slowly on the rise ever since The Scream, there is some speculation that Slavers are actually descended from genetically engineered humans specially created to have enhanced psychic abilities, The Scream destroyed this project leading to the evolution of this vile blight upon the galaxy.
Stats: Str & Dex are 2d6, Int & Wis are 2d6+6, roll rest as normal. The Majority of Slavers have some Psychic ability and those in positions of power and prominence are almost always full-blown members of the Psychic Class, frequently of significant ability. All Slavers start play with a free bonus Psychic point.

PC Note: Slavers are not recommended as a Player Character race. 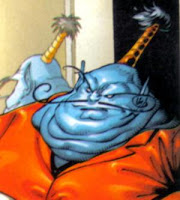 This write-up is very loosely based on the Slavers from Marvel Comics, first appearance Excalibur #17 1989. No copyright infringement is intended!
Posted by Brutorz Bill at 6:51 PM