My buddy Giles emailed me the other day, asking my thoughts about the Stars Without Number RPG.
He also said he missed my alien race posts for the game.  Well after several exchanges with him about the coolness of SWN, I dusted off my notes and thought I'd post another Marvel Alien race.
And here I was in full blown Fantasy mode! Darn Gamer ADD, Darn you Giles!! LOL 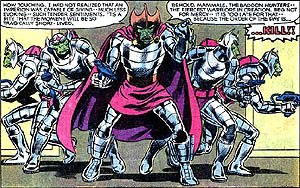 The Badoon are a 6' tall race of reptilian humanoids. Although the Badoon are an older race in the galactic scheme of things, they were quite late (compared to other races) in developing advanced technology. This was primarily due to an unusual gender schism…a hatred actually between the male and female members of their species, this conflict held them back from expanding and developing for centuries. The Badoon fought full blown gender wars for ages. After a time the males won and placed the females into captivity. In time, the males developed technology and abandoned their homeworld, leaving the females behind, returning only when their mating drive made it necessary. Their society is now divided into two with the Brotherhood of Badoon (ruled by a "Brother Royal") and the Sisterhood of Badoon (ruled by a queen) dwelling on the original Badoon homeworld, sometimes referred to as "Swampworld". The males became conquerors of other worlds and races, while the females became more pacifistic, apparently content to remain on their homeworld and oblivious of the males' star-spanning empire. Some scientists of other races believe the Badoon males developed some plant-based chemical means to control the females, but so far have been unable to prove this theory.
The Badoon will do whatever necessary to conquer other races; whether it is bolstering their forces with Zom soldiers (the corpses of victims turned into cyborg warriors) or putting a long term intricate plan in place that may take decades or longer to bear fruit. The Badoon are believed to be active on countless worlds, many worlds are unaware of the Badoon's plotting of their society's downfall. Currently the Badoon control (either overtly or covertly) multiple star systems and work to conquer and dominate more.
Cloaking Field: The Badoon have taken the Artifact Tech of Ghost Mantle armor a step further and have been able to develop personal Cloaking Field technology. This field renders an individual Badoon effectively invisible! The Badoon and any gear that he is carrying are completely invisible. Only specially designed sensors can detect his presence. Should the Badoon drop an item he is carrying, the item will immediately become visible. Any footprints or tracks he makes will be visible; also the cloaking field does not affect any sounds the Badoon may make so if he is noisy he will draw attention to himself. All attacks against the Cloaked Badoon are at -4, unless the attacker is using specially designed sensor devices. Should the Badoon attack any creature/person the field is disrupted and the Badoon becomes visible. These personal cloaking fields are rare even among the badoon and only used by their elite warriors and special scout teams, they also go out of their way to make certain this technology does not fall into the hands of other races. They will never trade or sell this technology! 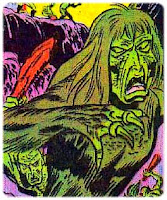 A Badoon female…no wonder the males all moved to another planet!
SWN Default Campaign Setting Notes: The Badoon were not affected by The Scream for two reasons, one they were slow to develop technology and so at the time of The Scream were not key players on the Galactic Scene; the Terran Mandate considered them to be a minor nuisance back in the day. In fact one could argue that the Badoon benefitted from it, with the Terran Mandate devastated by The Scream the Badoon have been able to expand their Empire and two, to date no Badoon has exhibited any psychic ability. So their technology never had a basis on Psychic energy.

Brother Royal
PC Badoon
A player character Badoon is quite rare, they tend to stick together and work to dominate other races, in fact a lone Badoon working with other races is more likely a spy for his Brotherhood, so most other aliens tend to distrust a lone Badoon's motives, however a renegade Badoon while quite rare is possible. Badoon roll 3d6 for stats but must have a minimum of 14 in their strength attribute. Their scaly hide grants them a natural AC of 5 against primitive weapons. Their scaly skin tends to get irritated when other armor is worn over it, so they seldom wear much clothing or armor at all. Being Cold Blooded creatures they avoid cooler climates and in fact in temperatures below 40 degrees are at -2 to all attacks and skill checks, unless wearing an environment suit.
PC's will not start out with a personal Cloaking field, unless the GM decides otherwise. Also unless GM states otherwise, PC Badoon cannot be psychics. 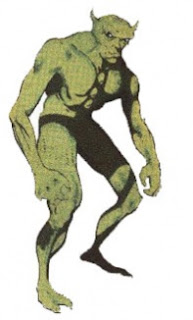 Adapted from Marvel Comics, I tweaked them slightly to fit in with the Stars Without Number Campaign Setting. The Badoon first appeared in Marvel Comics Silver Surfer #2 (1968) No copyright infringement is intended.