Stars Without Number : Other Dust

I haven't posted about Stars Without Number in quite awhile, but it is still one of my favorite Sci Fi RPG's out there today.  It's just hard to get much gaming in these days and when I do get to play most folks around me are strictly into Fantasy gaming.  Anyways thought I'd share something I found on the official Sine Nomine Publishing Site. The cover to the SWN Post Apocalyptic expansion to the game, Other Dust!
Check it out!! 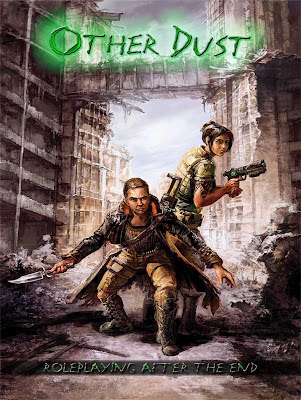 It's due out this summer, and some of the behind the scenes bits I've seen look awesome!
Here's a blurb about it from the official site,
"Ashes to Ashes….

The world is an open grave. Green glass plains and trinitite pearls necklace the throats of torn cities. Prismatic jungles heave with nanite-infested life, thick with twisted bodies and fever-hot madness. The ancient towers of Old Terra are cast down into the mire and the stars above no longer send their ships of steel and burning light. Humanity has been reduced to struggling enclaves and fugitive tribes. Left to scavenge the bones of their former glory, mankind yet fights the New Earth with steel, salvage, and a burning defiance. If the motherworld means to end her children, she’s going to need a bigger apocalypse."

And more about the book:

"Other Dust is a stand-alone, fully-compatible companion game to the free Stars Without Number sci-fi RPG. Within its pages, savage mutants, crazed psychic overlords, runaway war machines and the relentless decay of a shattered world all conspire to snuff the last few embers of humanity. Yet heroes remain among the scattered survivors, and their courage and will to defy the coming night might yet save their people from a waiting doom. Use the tools this book provides to rebuild societies, reforge their ancient bonds, and bring a new dawn to a thousand points of night!"

And to help wet your whistle!
Here is a teaser about the game for free over at DriveThruRPG!
Posted by Brutorz Bill at 12:51 PM