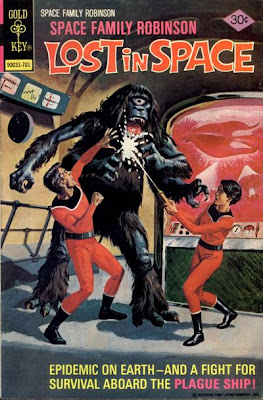 Cyclopean Grappler Ape
AC: 5
No. Appearing: 1 (1d4)
Hit Dice: 4
Saving Throw: 13
Attack Bonus: +8
Movement: 30', 40' when down on all 6 limbs, can climb at 30'
Damage: claw 1d6/claw1d6/claw1d6/claw 1d6 Morale: 9
*Due to the creatures four arms any Grappling or Climbing attempts are at +4 .
These 8' tall alien apes are a true terror whenever they are encountered. Originally believed to have been from a distant jungle planet, their original homeworld has long been forgotten, now they are scattered across the galaxy apparently as a result of zoo exhibits, many escaped into the wild and now prey upon those that once viewed them as freakish beasts. To compound the problem a recent trend by unscrupulous criminals and such is to use these creatures as guardian beasts. Only the most vile and desperate would do this, for no one has really been able to successfully domesticate these creatures, and they seem particularly hostile to humans. There are many cantina tales of criminal hideouts being overrun by the very beasts used to guard their compound.

Note: I don't actually have this comic, so not sure what the "real" story on this beastie is, I just went with what the picture inspired me with. : ) 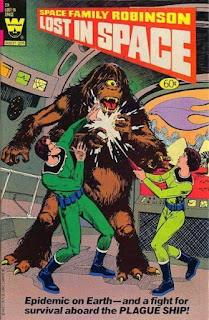 While I worked these up with Stars Without Number in mind, with just a few minor stat tweaks these creatures would work equally well with the excellent X-Plorers RPG! And if you were so inclined I could see them working just fine in Mutant Future! Isn't the OSR awesome! : )
Have a Great Simian Saturday!
Posted by Brutorz Bill at 9:01 AM