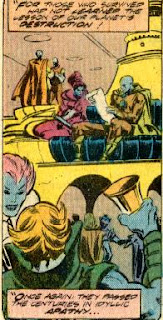 Lenses: Indolent, Irresponsible
Government: Democratic Republic lead by a "First Citizen"
Technology Level: 4 (but declining, no Spike Drive technology)
Motivation: Hedonistic, Decadent
Levians are a humanoid race, very similar to humans in appearance and body structures save for their blue skin and different range of hair colors. Levians are the epitome of hedonists, being perhaps one of the most indolent races in the galaxy. After depleting their planet of magma and resources, the Levians sent a fraction of their population aboard a starship to survive their world's imminent destruction. The survivors continued their wasteful ways and now live out their lives aboard their crippled, drifting worldship; The Levianon, served by robot minions that they no longer know how to repair.

Player Character Levians should only be allowed by the GM under very special circumstances. The Levian homeworld is uninhabitable and the only remaining Levians, an estimated 5 million, are on the Worldship Levianon. Stats will be the same as normal humans. Few Levians bother to actually engage themselves enough to attain a class of expert or warrior and no Levian Psychics are known to exist, they just don't have the discipline to learn how to properly use/control their abilities. 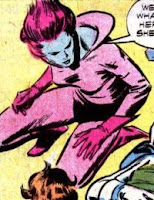 Levians are protected by robot guardians they refer to as The Securitrons; these robot guardians are assigned to provide security aboard the Levianon. When not in use, they rest inside of Servo-Pods, emerging during a state of emergency. Over the years, the Levians have forgotten how to repair the Securitrons, resulting in their numbers slowly dwindling. The Securitrons are equipped with powerful laser rifles (1d10 damage but no burst fire), but some of these rifles are malfunctioning and no longer work.  Treat the Securitrons as Infantry Warbots per pg. 167 of the SWN Mongoose Edition rulebook (GM's option; only 1 in 6 has a functioning laser rifle).