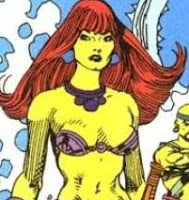 Ba-Bani
Lenses: Combative (Not Xenophobic, but have distinct regional hatreds that regularly descend into all out war)
Government: Local militaristic dictatorships
Technology Level: 3 (but personal weapons and body armor are TL: 4 in many cases)
Motivation: Domination (rival clans and groups strive to dominate other Ba-Bani groups through warfare). 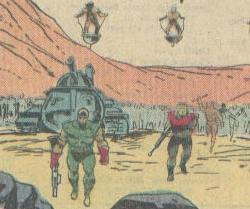 The Ba-Bani are an alien race of humanoids very similar to humans, with yellow skin and orange to yellow hair. They are the same general height as humans, although they are leaner and more muscular, out of shape Ba-Bani are not acceptable members of their society. Some human scientists have theorized they are descended from genetically engineered human stock, tailored to be soldiers for some ancient forgotten group. Indeed the races proclivity to divide into groups and wage war on one another, yet having no additional animosity towards other races does give this some merit. However, if an outsider identifies himself as a member/ally of one of the opposed groups he is fair game. The Ba-Bani hotly deny this theory saying they are an independently evolved race, that is they deny it if you can get them to stop fighting one another long enough to comment. Many pirates and slavers have learned the hard way to leave the Ba-Bani alone, there have been reports of pirates attempting to take advantage of the Ba-Bani during one of their many wars, thinking that the Ba-Bani with their "lower" tech level and "weakened state" due to war would be easy pickings, the Ba-Bani when attacked like this quickly stop fighting each other and go full out attack against the invader, after the invader etc. is repelled they resume their conlict with one another.
Recently a powerful human psychic called the Goddess of Peace by the Ba-Bani has come to their world and for the first time in centuries an extended period of peace has ensued. While there are still some isolated rebels and rogue clans fighting, for the most part the world is at peace, all thanks to their goddess; Moondragon. Many Ba-Bani do indeed worship her as a true goddess.

Adventure Seeds
The party is approached at a Starport by a Ba-Bani, he says his people have been enslaved by a crazed psychic that dominates his leaders through the power of her mind, he begs for their help. 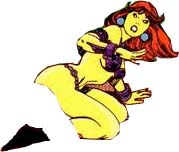 The party is approached by a robed alien (race determined by needs of GM), he tries to hire them to kidnap a rogue psychic hiding out in a temple on the planet Ba-Banis who is wanted for crimes against his people. He is actually an agent for the Deonists and is trying to get the party to do his dirty work.
A weapons dealer (smuggler) seeks to hire the party to transport a shipment of weapons to the Ba-Bani, they are always in the market for better ways to fight each other, although they tend to shy away from weapons of a massive destructive scale.

A desperate Ba-Bani female approaches the group and states that her people's goddess of peace, the Moondragon has been kidnapped by alien slavers and her people are desperate for her return! Slavers are taking her to the Deonists who seek her psychic essence to power their dying world!

Ba-Bani are copyright Marvel Comics, no copyright infringement is intended!
First Appearance: Avengers I#219 (May, 1982)