Thought I'd continue my earlier post about the Dragonstar RPG, and talk a little about the core books of the setting.
First up is the Starfarer's Handbook. 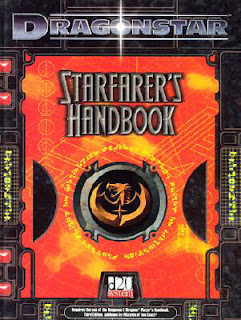 It is basically the Player's Handbook of the setting, BUT you have to have a copy of the 3.0 D&D Player's Handbook to make full use of the Starfarer's Handbook.
Chapter one is in color and gives a nice intro to the Dragonstar setting to enable players to get a feel for what it is about, you get a good handle about the Dragon Empire and such.  Chapter two goes into races; dwarves, elves, gnomes are all in there with some notes on integrating them into a sci fi setting (example: elves get a +2 bonus on Freefall checks).  Then some new races are covered; Drow (the secret police of the Dragon Empire), Orcs, Half-Dragons (often times the royalty of the setting), and a completely new race Soul Mechs (robotic constructs that have been animated with a sentient soul).  Chapter three is about classes, all the core classes are present with notes on how to integrate them into the setting, then some new classes are included; the pilot and the mechanist (I remember one of my players triple classed just so he could call himself a Rogue Fighter Pilot (LOL). Prestige classes are then discussed with notes on how to integrate core rules ones into the setting. Some new ones are included, The Gundancer in particular sounds cool but I never got to play one. We get chapters on Skills and Feats for the setting (Two-Gun Shooting, Starship Piloting, Speed Load and more).  Then comes the equipment,  everything from Blaster Rifles to Shock Armor. I would have liked to have seen more covered in the robot section but there are some example bots included.  The chapter on combat goes alot into Firearms and how they work in the 3.0 rules. Chapter eight is about magic, I love the concept of the Spellbook software, Kindles weren't even around when the rules came out, but how cool would it to be to tote your spellbook around on a Kindle instead of some musty bulky old tome?
The rest of the book touches on some new spells, vehicles, vehicle combat and some example starships.
Reading my above entries makes the game sound rather dry.  Not at all, it has some great stuff in it. I like the artwork for the most part, in particular the art does a good job of capturing the setting (dwarven asteroid miners, drow commandos,  etc.).  I'm no longer into the whole 3.x game mechanic, but back in the day when we were playing that edition of the rules this was a setting we very much enjoyed.
Some may ask why not just play Star Wars? For me and my group we didn't really want to play Star Wars, we liked the concept of D&D in space and Dragonstar more than met that expectation. Meeting up with a swarmy halfling informant at the Ugly Umberhulk Cantina only to get into a firefight with auto-gun toting Bugbear gangsters is just waay cool!
Posted by Brutorz Bill at 1:49 PM