The flu has thrown me off on posting my Mutant Future Sessions, not to mention I had to cancel the last game because I was still sick.  It's pretty long and probably overly detailed but several of you have commented you enjoyed the first write-ups about the campaign so here goes... 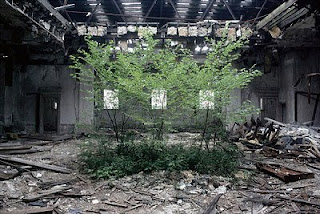 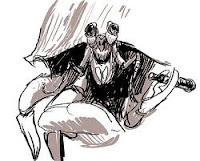 The group got along quite well with the mutant crabman. In exchange for the gems and jewelry taken from the goatlords, the heroes got some needed gear including a damaged nail gun rifle (that Trader Crab said once belonged to a member of the Nailgun Disciples Gang) and an extra power cell for Tink's laser pistol. The big deal maker however, was when Sherman offered Trader Crab a copy of the map he had made showing the way through the Maze, including the safe areas where they had blocked off access to the Trog tunnels. The appreciative Trader offered Sherman some damaged but useful Kevlar armor. They talked about the different gangs in the area, and remembering their mission parted ways with the Friendly Trader.

Tune in Next time for...
The Return of the Goatlords!, Trog Terror!, Come here Fido! and The Church of St. Vermayne!
Posted by Brutorz Bill at 3:36 PM