Brother Thomas, a man of Healing

Thought I'd post an NPC from my Mutant Future Campaign.  He has been central to the events of the past three sessions so I thought I'd put him out there for you. 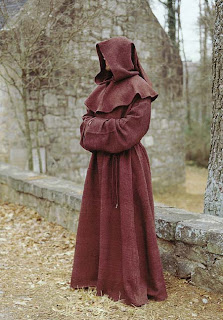 Weapons & Gear : Monk's robes, waterskin, backpack, rope belt, rations, Medical bag (filled with various healing devices and supplies depending on the needs of the Mutant Lord), various healing herbs and such. Any other tech he finds he quickly trades off for more medical supplies.

Known throughout the ruins as a man of healing and peace, Brother Thomas is a member of the Healers Cryptic Alliance an order of healers that can trace their roots back to those few men of healing that survived the great apocalypse and took vows to provide help and healing to the surviviors of that dark time. Though limited in number they are respected and valued wherever they go. It is said that even savage wild animals will let them pass by unmolested. Only the most deranged or vicious of raiders and mutants will harm a healer, for none wish to be denied the near magical touch of these wandering priests.
Brother Thomas is the epitome of the values of his order. It is said he has never raised his hand against another, whether it be mutant, pure strain or otherwise. If he suffers from any prejudices he has never shown it. While a man of peace he is no coward, recently when word went out that a distant community was dying from Crimson Spotted Fever, he set out alone to make the journey to save those he could. None would accompany him for fear of the disease.
Posted by Brutorz Bill at 4:18 PM