While I'll admit moving away from 3.X based games a bit ago and returning more to my gaming roots mechanics-wise, one campaign setting that came out towards the end of 3.0 was one that I had a blast playing/running and wish had continued longer. That setting was Dragonstar by FFG.

We played the heck out of Dragonstar back in the day.  We fought Bugbear Gangsters, Drow Space Pirates, Void Trolls, Halfling Star Commandos and had a blast!
Sadly I think timing was what killed the setting. 3.5 came out right after it was released and I believe d20 Modern as well, which caused the mechanics to perhaps be seen as "dated" by the masses.  Some of the later books for it were not as good as the original books, but I grabbed everything I could for it and even worked up my own stuff. 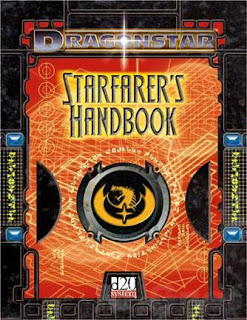 We had a ton of fun with the game.  It came at a good time for our gaming group, we had been playing "regular" 3.0 D&D for quite awhile and this setting really scratched an itch for us in a way that d20 Modern just didn't do.  I'll never forget when I unleashed a group of Hobgoblin Bounty Hunters geared out in armored dusters and blaster rifles with their cyborg Carnivorous Ape "pet", the high level cocky fantasy party just about had a TPK, they knew they weren't in Kansas anymore.  Good Times!
Sure it was "D&D in Spaace!" but why is that a bad thing?  LOL
Posted by Brutorz Bill at 8:16 PM