Save me from The Weed!! 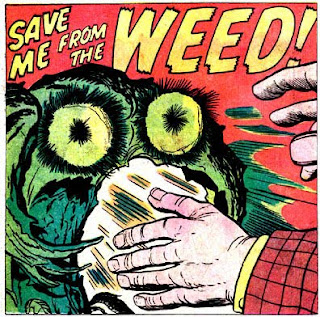 How's that for a title that made you think of something else?!  I'm sure "Weed" had a different connotation back in 1962.
Anyways I haven't posted any critters in awhile and I thought this one would make for a fun write-up. This is primarily worked up for Mutant Future, but with some minor tweaking it would work fine for an unexpected threat in a Labyrinth Lord game.  If I ever get to run Planet Algol, I might could see using this beastie in the Slime Lands also.

The Weed is a newly awakened sentient mutant plant with extremely limited mobility. It has a high intelligence and a wide array of mental powers including telepathy. The Weed can overpower others mentally, and force them to do its bidding. The Weed's main vulnerability is that it must be rooted in fertile soil. The Weed considers all of humanity to be nothing more than slaves meant for it to conquer. It hopes to create an army of minions to force its will upon the stupid mammals and beasts that walk the earth. In time it will have a much larger hoard, as well as, servitor minions, but for now it has a limited area of influence. It will consider other intelligent mutant plants, like Brain Plants which it may be related to, a threat to its supremacy and will work to have its minions destroy any and all that they come across.

Adapted from Strange Tales # 94  1962
(please note the stat block above heavily relies on the Brain Plant write up in the MF core rules)
Posted by Brutorz Bill at 4:15 PM