I Unleashed Shagg upon the World!! 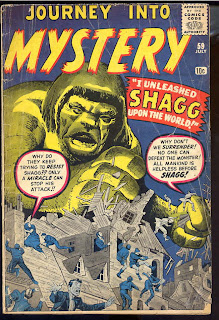 66' high, 241' long! The massive construct known as Shagg is a near unstoppable force of power and destruction. If that wasn't enough it wields powerful Cosmo-Gamma Electro-Magnetic Waves which can apparently alter reality… Yikes!!
Shagg has lay dormant in plain sight for centuries. Shagg appears as an enormous seemingly inanimate sphinx statue. An unwitting Scholar accidentally activated this construct and it proceeded to go on its preprogrammed path of destruction. The scholar was somehow able to explain to Shagg that its activation was an accident and not part of its "Master Plan". Shagg then used its powers over "Cosmo-Gamma Electro-Magnetic Waves" to repair all the damage it caused and then returned to its inanimate statue form. *whew*

Ok, clearly I statted up Shagg as more of a gag or a DM plot device than anything else, still it is fun to look at these old comic monsters from the early 60's. 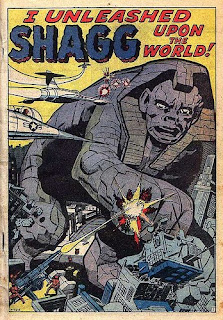 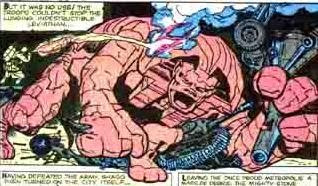