I was going through a box of some of my old AD&D DM Binders and came across this write-up I did many years ago. I recall basing it upon someone else's conversion for the Palladium Fantasy RPG that I found on the 'net, but I couldn't tell you who the original author of the Palladium conversion was, that was before Palladium Books went all Cease and Desist on anyone doing conversions for their stuff. Anyways thought some of you might get a kick out of this, particularly those of you who game with your kids. I also think they would fit in nicely in a Tellos based Campaign setting. 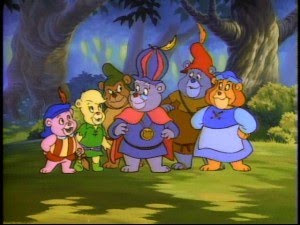 Climate/Terrain: Temperate/Dense Forests
Frequency: Very Rare
Organization: Tribal
Activity Cycle: Day
Diet: Omnivore
Intelligence: Average to Very
Alignment: Any (however 70% are of a good alignment, evil ones are rare and are not tolerated within a Gummi Bear colony).
No. Appearing: 1d6, a colony may have up to 50 individuals.
AC: 6
Movement: 12
Hit Dice: 2 and up
# of attacks: 3 (claw/claw/bite) or 1 (by weapon)
Damage/Attack: 1d3/1d3/1d4 or by weapon type.
Special Attacks: Spells
Special Defenses: Immune to plant toxins, save vs. other poisons at 4 hit dice higher.
Magic Resistance: 40%
Size: 2-3 1/2 ' tall Weight: 25-75 lbs.
Spell Like abilities: Charm Person 1x day, Detect Evil 2x per day, Tongues 1x day.
Natural Abilities: Keen normal vision, Animal Empathy, Infravision 50'.
Skills & Languages : Common, Faerie and one additional language. All are taught herbalism at an early age. Most are also accomplished singers.
Gummi Bears are a race that has for the most part gone unnoticed. They are small bear-like creatures that inhabit dense forests on the outskirts of human settlements. They maintain a keen affinity with most wilderness creatures and strive to live in harmony with their environment. They are very curious about human culture, but have, so far, been too cautious to announce their presence. However, this curiosity has caused them to locate their colonies or "Hives" close to human settlements, so that they can observe the humans in secret. Their communities tend to be underground dwellings, a traveler could be walking over a Gummi Bear community and would never know it. While little is known about these creatures, sages speculate that they are in some way related to Faeries, evidence of this lies in their high magic resistance, innate spell powers and their ability to concoct magical potions.
Appearance: They look like small humanoid Teddy Bears.

Gummi Bear Juice
A mystical concoction made from the elusive "Gummi Berry". When a Gummi Bear consumes 1 oz. of "juice" he gains the strength of a stone giant (20) as well as, 1d4 additional points to constitution and dexterity for approximately 10 minutes. On humanoids the effects are highly variable, but also short lived. Irregardless of race the effects of Gummi Bear Juice can only be experienced once per day, further consumption will only resort in a pleasant "giddy" feeling. The most common effect non-Gummy Bears experience is stone giant strength (20) for 2 minutes, however, other effects have been known to occur (see below*). Please note that these potions are extremely rare and can only be made by the colony's chief Alchemist/Herbalist (who is apparently always a female). As a consequence price is very high for non-gummi bears even those favored by the hive. It has been reported that the chief alchemist-herbalist can also make other potions as well. Reports vary but the two most commonly reported are potions of healing (made from rare bee honeys) and sweet water (harvested from the dew of an unknown deep forest fern).

Sure the table is a little wonky, but it was from many years ago! ; )
Posted by Brutorz Bill at 9:43 PM