Believe it or not the first Hard Back RPG I bought was the original edition AD&D Deities & Demigods, you know the one with Cthulhu and Elric!  I was but a wee lad and was still trying to get my head around this whole "D&D" thing.  I had recently picked up the Gamma World boxed set and loved it but wasn't sure what to make of this whole ADVANCED series of books. I had played D&D with my cousin, he took me through White Plume Mountain, I was a FIRST level dwarf BY MYSELF! My cousin said Infravision was stupid, I hadn't bought any torches cause I was a dwarf with Infravision, he said it didn't work AFTER I got in the dungeon, I Died in the dark, Quickly and horribly and still am not sure what killed me, he said it was too dark for me to see.  Even though I was a newby I knew something was awesome about this game and something was not so awesome about my cousin's DMing skills.  I decided to get the books and figure this whole D&D thing out for myself.
I convinced my mom to take me to the local Sears (& Roebuck) and spotted this awesome looking book: 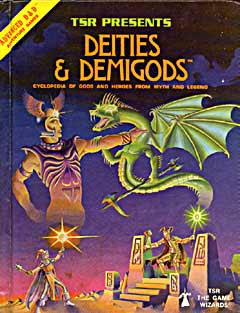 I had always loved Norse and Egyptian Mythology and just knew that Advanced or not this book was for me! With my limited allowance I could only buy one book, so before I got the Player's Handbook, DMG or even the Monster Manual I was the proud owner of Dieties and Demigods.  In retrospect this purchase, as well as starting with Gamma World has warped my perspective of how to play/run D&D ever since.  I love weird races and beasties in my games, I frequently use planar adventures/misadventures etc, and my players usually have to scrape/scavenge for every bit of treasure gear they get (a la Gamma World). Magic items are often weird, unusual or mysterious forgotten relics and I often have dark and mysterious gods/temples in my campaigns, with a healthy dose of knights and other stuff.
To my young gamer eyes, this book was the mother load, I could have dark Cthulhu gods, with native american heroes alongside Arthurian knights keeping a watchful eye on their albino "ally". I didn't let my cousin DM after that, I took over the reigns and have never looked back!
Good Gaming -B.
Posted by Brutorz Bill at 11:15 PM