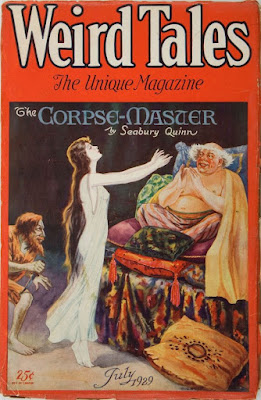 Going back to the pulp covers for this one.  Weird Tales, from back in 1929.  Once again, I'm just basing this off of ideas from the cover, not from the actual story within.

This cover is just creepy as heck.  The seated man, to me is a foul Necromancer, he lives a life of luxury, at least compared to those around him, using his powers over the dead to support his greedy, gluttonous lifestyle.  So now to work this into Hyperborea.  I know at some point my players will be in Khromarium.  When running urban based adventures, I like to have a lot of different options for the characters to follow up on.To me it just makes sense, especially in a large urban environment, for there to be lots of different leads and plot hooks available. The players won't follow up on all of them, these player choices will lead to other events unrolling as a result of the character's actions or in-actions. I like to have the player's characters decisions have an impact on the campaign.

So back to the necromancer in the image...he needs a name, fortunately AS&SH has a great PDF to generate names appropriate to the Hyperborea setting. People can play however, they like, but for me genre appropriate names are important to me for my campaign immersion experience. Mr. Boopers the Barbarian is a no go for me. I don't see this guy as an Ixian, no to me he looks like a commoner (mixed blood) that has used his magical abilities to advance himself.  So rolling on the name generator for commoner names I get Zonn Vai...I like it Zonn Vai the Corpse Master!  Creepy villainous character!

So Zonn Vai, likes to think of himself as a man of power and ability, but in actually he is just a petty, vile low level Necromancer, just high enough level to be able to animate the dead and terrorize the regular folk in his run down part of the city.  I can see him living in what was once an impressive mansion or structure for the wealthy, long abandoned by its original owners, Zonn Vai has set up his little "kingdom", demanding tribute from the locals.  The area is now a "bad neighborhood", which in Khromarium is the norm.

Zonn Vai can cross the character's path in a number of ways...he could initially be a patron. Maybe he has learned of the location of some secret crypt said to contain a magic relic or device in the dark passages below the city, he just needs a group of pawns..er adventurers to recover it for him...Looking at the picture of the young pale, zombie? girl maybe the party is contacted by a local merchant, the merchant's daughter died recently but before the funeral rites could be completed the body vanished.  Zonn Vai has animated her and has her in his lair. Can the party take on Zonn Vai and destroy him entirely, or will they just be able to recover the poor undead girl and allow her to be laid to appropriate rest? Kidnapping a zombie girl? That's an interesting challenge? Maybe a key condition of the Merchant father is that his daughter's body be undamaged/unharmed?  Take that Murder Hobos!

The ragged slouching dagger wielding guy in the corner to me is a underling of some sort. By the large size of Zonn Vai he clearly doesn't do any physical labor himself, so having a underling to do the grave robbing, petty killing, etc..guess he needs a name as well....rolling on the tables again...I get Sarr...hmmm he is creeping about to me... So how about "Skulking Sarr".

Lots of gaming options from this one cover image, and it could even be used outside of Khromarium, Zonn Vai could have set himself up as the petty tyrant over a small town or larger village.  Although, I like the Khromarium connection better. There should be a lot of different personalities and conflicts around in a urban environment for the party to hear about, work for, interact with and come into conflict with...

So that's my Hyperborea entry for this morning. I came up with this pretty quickly.  Just looked at a old pulp cover that caught my eye, a few random rolls here and there and I think I have an interesting villain to work with...I'll keep his stats to myself for now, never know if my players are reading the old blog!

Hope everyone is safe and healthy out there during these difficult times.