Woke up this morning to see that we had a significant snow last night (for us anyway).  Which got me thinking about Hyperborea.  I then went through my image files of Classic Comic and Pulp Covers and came across this one from Classics Illustrated. My initial thought would be this has nothing to do with Hyperborea, then my eyes caught the dog sled in the background, registered the Monster was fleeing into the frigid icy wastes and I thought...wait a minute...of course!

Frankenstein's Monster wandered off into the frigid frozen lands of Earth...never to be seen again...

Because he ended up in Hyperborea!! 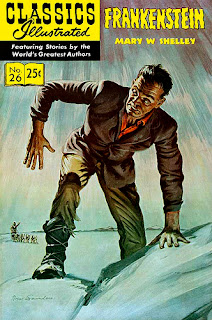 So I opened up my newly arrived PDF of the Hyperborea Referee's Manual, (love the cover art on it/in it!!) 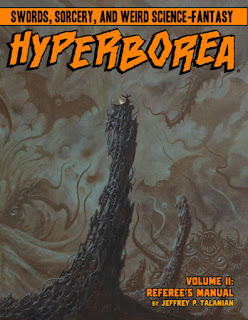 At first I went looking for Flesh Golem stats... then I found what I was looking for in the Bestiary, under Automaton.  Flesh Automaton to be more specific! There is a full page art piece for the monster and yes it very much looks like the Frankenstein Monster to me! I'm not going to reprint the stat block here (get the book!!), I'd pretty much use the official stat block, as is, I mean the AD&D Flesh Golem was based on Mary Shelley's Frankenstein, after all, (you haven't read it?!  get to it!!) however, I would make one minor adjustment to the Flesh Automaton stats to represent the Frankenstein Monster... Mainly related to fire. I'd say in the face of a large fire (DM discretion) the Frankenstein Monster would have a morale of 9 instead of the normal Morale of 11. He would have the rudimentary intelligence mentioned to automaton's that are no longer controlled.  Otherwise you are good to go.

I think this could make for a cool (pun intended) and interesting encounter in my Hyperborea Campaign.  Think of the players characters having a ship that comes across a Viking Longboat wrecked on the ice, the crew have been pummeled to death, beaten to bloody (now frozen) pulps.  And deep humanoid tracks lead off into the ice flows...do the characters follow?  I bet they won't expect Frankenstein's Monster!!

Another idea or even a connected one, depending on your campaign needs, is that the player's ship now wrecked on the ice, encounter a group of Esquimaux that are being terrorized by "something". The Esquimaux will help the PC's (maybe with supplies or materials to repair/free their ship) but first they need to have the PC's deal with the monster that is out there!   I'm thinking the Esquimaux know more than they are saying, maybe they found the Monster initially frozen in a block of ice.  In true Hyperborean fashion these Esquimaux are Kthulhu worshippers and sought to sacrifice this strange creature to their dark deity. In the process of the sacrifice they "thawed" him out, only to have the monster go berserk attack them and flee into the icy wilds.  Can the party trust these cultists?....

(By the way as an aside, if you have a bit of DM Burnout, or are just looking to get inspired, go to the Pulps! Just looking at the old covers gives me tons of ideas!!).