For me personally the roots of RPG gaming are firmly in the realm of Post Apocalyptic (P.A.) RPGs.  Specifically Gamma World, my online handle "Brutorz Bill" is named after my first Gamma World character.  I've been a fan of P.A. Gaming ever since I found first edition Gamma World at the Mall (remember those?) back in 1979! While we played a ton of D&D, we always came back to Gamma World. Always enjoyed GMing Gamma World and many of the P.A. RPGs that followed.  The early days of this blog were heavily focused on the OSR game Mutant Future, had a blast running that one, with friends and even at a few local Cons. I have a stack of P.A. RPG's.  Gamma World (many editions), Mutant Future, The Mutant Epoch, Rifts (Original Rifts was more P.A. than in later supplements), Other Dust and a whole hoard of independent P.A. RPG's.  Even my recent Hyperborea RPG interests have a bit of P.A. in them.  Whew, I'm rambling...so what's the point of this blog post?

I want to talk about a fun RPG that I have discovered called Vaults of Vaarn! 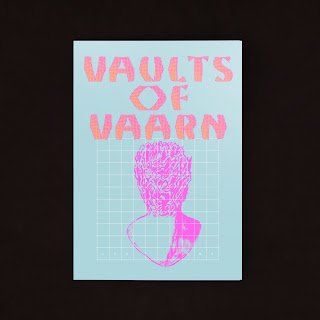 Here is a blurb about it,

"The sun is dying and the wreckage of countless eons litters the parched wastes of Vaarn, the desolate country that common folk call the blue ruin. It is said that these sky-coloured sands hide the graves of the Autarchs; have swallowed the buried arcologies in which the true seed of humankind was preserved through the Great Collapse; conceal forgotten crypts of memory, decaying crystalline lattices of ancient ego-engines upon which the dusk-blue dunes encroach without pity. From the New Hegemony to the south come drifters and dreamers, desecraters of the tech-tombs that lie sunken beneath the azure wastes. Light-years overhead, aurum-hulled craft ply their tender routes between the spheres, and miles below a pilgrim’s feet, strange wombs are kindled once more with life undreamed of.

These are the hinterlands, where humanity’s great works have fallen to everlasting decay, where machine and animal and fungus think to crown themselves our equal. The phthalo-sands, where newbeasts hunt proudly with boots upon their hind paws and chromepriests chant unending binary devotions to their nameless synthetic god. Only the desperate or the mad would seek to make a life here, to roam the blue desert in search of the secret VAULTS OF VAARN."

Very cool setting, that evokes Dune (we just got the new movie on DVD, but still love the 80's film), Gamma World, a bit of Numenera with a Mobius vibe to tie it all up in an amazing package.

Currently Vaults of Vaarn consists of three zine sized books.  More are in the works per the author.

You can get the PDF for free HERE and it is pay what you want!!! What a deal!

The creator's blog is HERE with more about the setting, game and session logs from his home games.

I'll be posting more about this one!