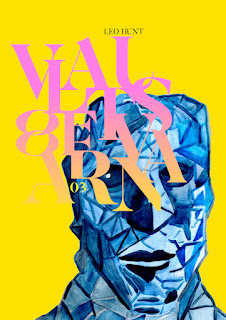 To date, Vaults of Vaarn consists of three zines. Although more issues are said to be in the works.

Here's the official blurb about this issue:

"Vaults of Vaarn returns for a third issue of science-fantasy RPG content, providing further support for referees who wish to set their game in the blue deserts at the very end of time. Issue three focuses on the Vaarnish Interior, the endless sand-sea that intimidates even the hardy souls who live in the dry and dangerous badlands.

No accurate map has ever been drawn of the Vaarnish Interior: the territory seems to defy rational organisation. This is a place without borders, the horizon between blue sand and blue sky no longer a stark dividing line but rather a molten membrane that swims and drifts woozily in the sun’s wine-red heat, the land making and remaking itself just as a lizard sheds its skin. The blue sands retreat from the wind, revealing structures that have lain dry and deathless and undisturbed for aeons, and then those same restless dunes shroud the ruins once again, before a living soul can name them. This is a country vast and blue, as deep with secrets as the ocean and twice as capricious.

You can get it HERE as a pay what you want!!

So with that said, let me say I love this issue! It is loaded with random tables allowing you to create your own unique and interesting version of Vaarn.  I got one of those massive notepads, you know the ones you use when doing a big presentation? well back when we did big presentations in front of a group, and before Power Point? Ok , showing my age... Anyways, following the steps in Zine #3 I rolled up a fun area for a party of adventurers to explore, I may post the map area I worked up down the road.  It has Campaign spoilers on it, so want to keep some things a mystery for when I get to run this game.

Zine Issue #1  gives basic rules of the game, basic character types and some cool random tables to get you started

Zine Issue #3 takes things to the next level and allows you to go wild randomly rolling up your own region of Vaarn!  Good Stuff!

Even if the author doesn't produce anymore Vaarn Content, there is enough in these three issues to have a full campaign. However, he has more planned, so can't wait to see what's next!

Hope everyone had a wonderful weekend and is safe and healthy!