My second blog post regarding the Vaults of Vaarn zine. My first post can be found HERE 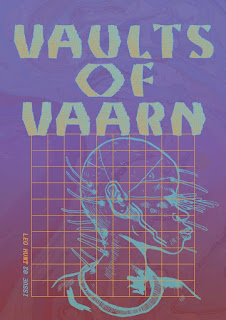 Here is the official blurb about issue #2

"When a traveller is adrift in the blue dunes of Vaarn’s desert, he dreams of a city. When the camel’s hump sways beneath him, he dreams of a cushioned alcove in a tavern, with learned conversation and hookah smoke coiling languidly in the air; when Vaarn’s red sun beats upon his head he dreams of cool avenues shaded by demure and welcoming lemon trees. Oppressed by his loneliness, the traveller dreams of a city where the crowds embrace him and strangers greet him as brother; when he swills the last dregs of water around blistered gums he dreams of a a fountain in a public courtyard, where the daughters of the neighbourhood arrive to draw water and eye a handsome stranger.

Gnomon, the city of shaded markets, at first appears to be this dream made solid. There are taverns with cushioned alcoves, as the traveller sought; also he will find learned conversation and hookah smoke, wide avenues flanked by lemon trees, public fountains and smiling maidens and strangers who greet him as brother. There are many sights in Gnomon, sights beyond the traveller’s dreams: glittering mezzanine gardens and parades of masked hierophants, guild halls where cone-hatted clerks ponder their ledgers of debt, babbling souks where the merchants mutter their bargains like mantras and even memories may be bought for the right price. Truly this was what he sought in a city.

So bewitched is our traveller, he scarcely notices that the merchants’ smiles do not reach their eyes, that the women who wave from passion-house windows have faces brittle as porcelain, that each stranger calling him brother has an accomplice reaching into his pocket. It is only as he leaves under cover of darkness, with a head ringing from cheap wine and a purse empty as his stomach, that the traveller begins to curse Gnomon, the undreamed-of city, the gilded trap."

If you want to run your game in or around Gnomon, then this zine is right up your alley (pun intended)! It has a nice assortment of random tables to help you flesh out the city on the fly. My players are always going off in a different direction than what I had expected and having some random tables to determine what they bump into is most helpful. This issue has tables for such things as street hassles, mercenaries, merchants, trade cartels (Gnomon is a trade hub), urban shrines (all kinds of strange religions exist in Vaarn), pit fighters, gangs, taverns and more!