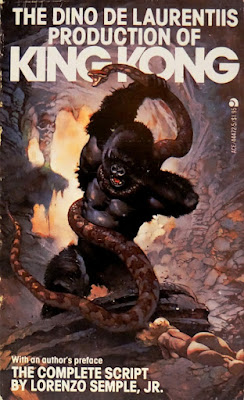 I don't remember the 70's  Movie King Kong fight versus the giant snake looking this cool!

So this image got me to thinking about Hyperborea (AS&SH).  I went to my newly arrived Hyperborea Referee's Manual PDF for the latest edition of AS&SH and while the Bestiary does have a variety of apes, there aren't specific stats for a Giant Ape.  I remembered an old module from back in the day, Isle of the Ape.  But in looking at it that's an 18th level adventure. Yikes!  I've been gaming since '79 and have never DM'd or played in a game of that high of a level.  I don't want to recreate King Kong for my Hyperborea Campaign (just yet...), Kaiju is neat, but not what I'm looking for here... I'm thinking an ape of something more in line with the size of Classic Mighty Joe Young. Big, but not kaiju sized... 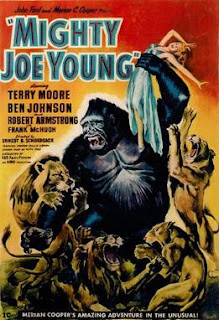 Which took me back to the awesome Hyperborea Referee's Manual.  Like I did with my recent write-up of the Pincer Tiger vs Crimson Maned Wolf why recreate the wheel when I can tweak and adapt what is already there.  So Hyperborea has the Mountain Ape, which is basically a reskinned ogre... they are up to 10' tall and can weigh 1000 pounds...ok now we are talking that is more the size range I am looking for... So adjusted the stats and a few other things, bring in the keen senses of the other Apes in the bestiary and voila...not perfect but gameable.

These rare, massive apes, resemble large gorillas, however, they are much larger and generally more intelligent than normal apes. Standing around 10' tall and weighing up to 1000 lbs.  They tend to be solitary, legend says in ages past Hyperboreans hunted the great beasts for sport, leading to their near extinction.  Some can still be found in lonely isolated lands and islands. They avoid civilized lands and humans, having a dim racial memory associating the smaller humans with danger and death.  Hyperborean Great Apes are generally not savage and chaotic creatures, there have been reports of them coming to the aid of injured or weaker creatures (although this tends to not be believed).  They are said to have shown an interest in human females, although the veracity of these tales is uncertain.

Oh and the Hyperborea Referee's manual has perfect stats for the Giant Pythons! So the work there has already been done.