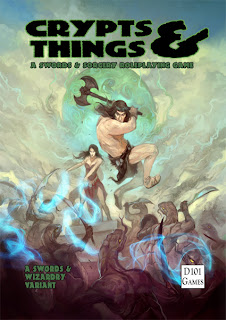 This is a Swords & Wizardry RPG Variant being put out by D101 Games.  Check out more about it here!  I gotta tell ya this sounds like sooo many kinds of awesome!  I even found a reference to Battle Apes that will be in it!  This can't come out soon enough for me!
Posted by Brutorz Bill at 11:52 AM