I've been on a Sci Fi kick of late, Mutant Future is great but I'd like to play something a bit more Space Operaish at some point.  I've been looking at a bunch of different systems, picking up rules here and there in PDF, but being a book in hand (Dead Tree) kinda grognard I tend to order print products if the pdf looks good to me.  I'm working around computers all day at work so I prefer to read a book the old fashioned way when I get home.  Just weird that way I guess.  Anyways having not finalized the RPG system which I hope to use at some point (although Stars Without Number is high on my list), I've been looking at gaming resources that can be used with multiple systems.
I recently came across Jon Brazer Enterprises d66 Compendium, it is a supplement of various tables to help "fill out" one's sci fi campaigns.  It is designed for Traveller but I see no problems using it for whatever Sci Fi setting your using.
Just sitting at my computer with my copy of the d66 compendium and making a few random rolls with my trusty d6's I came up with...

The Starship Arkham made its final approach to the planet Zelos, skirting past the dozens of antique communication satellites locked in orbit around the world.  Contact was made with Bayoone Starport far below, their contact would get them past the prying eyes of the Theocrats that would surely frown upon the Arkham's illegal cargo of Solomani Hemp!
Captain Noah wolfed down his bowl of Pink Curry Rice in the galley,  the Zelosians had bizarre laws about meals and eating and he didn't want to deal with the locals on an empty stomach. Noah made his way to the bridge, moving quickly he was long accustomed to the dim interior lighting on the ship, a design flaw that he'd never bothered to have fixed.  What he wasn't accustomed to was the dead fish smell that permeated the ship's corridors, a more recent "addition" to the ship, a hold over from their last passenger "ambassadress" Hekenu and her entourage, Noah disliked most aliens, but did his best to hide his prejudices. That would be bad for business, but their fishy smell just refused to go away.  After this run he'd have to have the whole ship's interior flash scrubbed just to get rid of the stench.  He should have made them wear vacc suits the whole time.
Imad their contact appeared on the comm screen, giving the landing coordinates, that would hopefully allow them to avoid the eyes and ears of the Theocrats.  Noah gave a slight smirk, eyeing the elephants in the background of Imad's screen, on Zelos all starport goods must be transported via pachyderm.  Another of the Theocrats bizarre laws.
Noah checked to make sure his trusty blaster,"Vera" was fully charged and prepared to land. 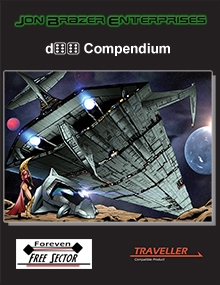