Confession Time...
I know I've complained about the Palladium System and in particular Rifts in the past, but I've always had a soft spot for Heroes Unlimited. While I got rid of most of my Rifts/Palladium Books, I held on to all of my Heroes Unlimited books and my After the Bomb/TMNT books.
One of my favorite campaigns of all time was back in the early 90's, my players at the time dubbed it "Modern Unlimited" ; I had everything in there, Heroes Unlimited, TMNT, Beyond the Supernatural, Ninjas & Superspies, even a few Rifts references, it was a blast. The party wound up unknowingly working for "Old Nick" (a powerful devil from the Palladium Fantasy RPG) to recover an artifact from the Smithsonian, we had alot of fun with that campaign.  Wound up with a near TPK before the campaign ended, I think only two players survived when the dust settled.  Ahhh good times!  : )
Anyways, don't tell my current players but I've actually "looted" powers and super abilities from some of the Heroes Unlimited Sourcebooks I own for our current Mutant Future Campaign.  Great way to make a particular NPC or Mutant beast particularly unique and nasty. Don't go overboard though, the powers in HU are NOT scaled to work with MF, you can quickly wind up with something that can utterly trash your party if your not careful, but with some tweaks they are workable.  In particular the mutant appearance random table section in the core HU rulebook can help you come up with some unusual appearing mutants. Something I prefer in my games.
This brings me to an upcoming release for Heroes Unlimited, I don't think we've seen a true release for HU in awhile.  Palladium has been kind enough to provide a free teaser preview for this one (pretty cool for them to do that I think, I wish more companies would do this). You can check out Armageddon Unlimited here. 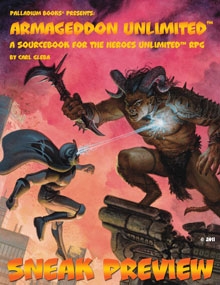