Well it's Simian Saturday once again, Clovis Cithog has already emailed for my lateness in posting today.  CC thanks for keep me straight!  : )
Anyways I recently came across an article regarding unmade movie classics. And one in particular really caught my eye!                                  King Kong vs. Frankenstein 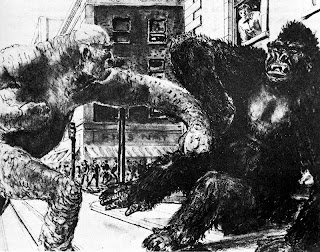 King Kong's creator, famed animator Willis O'Brien, conceived a script (in the 1960s) that he called "King Kong vs Frankenstein", planned second "sequel" to his original 1933 film. It was never made, though in the end, as "King Kong vs Prometheus", it was sold to Toho Studios in Japan, who re-conceived the project as Kingu Kongu tai Gojira [King Kong vs Godzilla] (1962; dir. Ishiro Honda) -- and then again, sans Kong, as Furankenshutain tai chitei kaiju Baragon [Frankenstein vs the Subterranean Monster Baragon] (1965; dir. Ishiro Honda) aka Frankenstein Conquers the World (US, 1966). 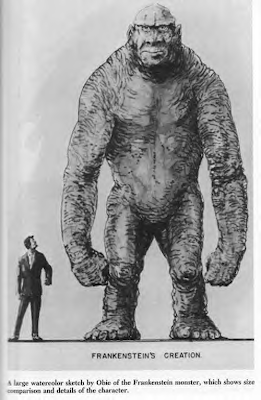 Shame it was never made, the original King Kong  is one of my favorite movies ever!
Have a happy Simian Saturday, the wife and I are off to a comic book convention!  Woo Hoo!
Posted by Brutorz Bill at 11:04 AM