Whew...It's Friday!  Work and school have been keeping me super busy of late, "The Man" is really taking advantage of the economy, at work we've had our pay basically cut, benefits slashed, responsibilities increased, workload doubled and in some cases tripled and told by the corporate suits "to be grateful we still have jobs" *sigh* I'm am thankful to have a job, but enough is enough! Sorry I'll end my rant here.  Anyways due to all of this my blog has been lacking in updates, and the posts I have done have been somewhat weak on substance.  Unfortunately it will probably be that way for awhile. In gaming news I've been hearing great things about Barbarians of Lemuria.  It's a rules lite RPG system with heavy influence from Lin Carter's Thongor series of pulp coolness.  I ordered the print copy today, it is also available in pdf but I'm an old school book in hand kinda guy. 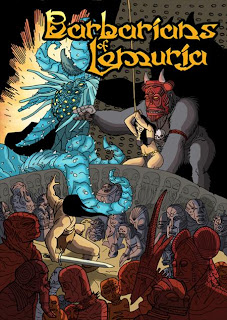 The BoL system is hailed as being quite adaptable and there is also a Post Apocalyptic version of the game -system out. Barbarians of the Aftermath 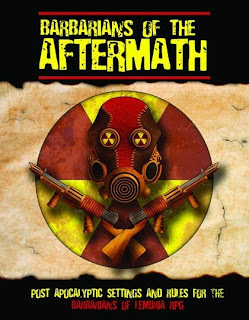 Depending on how well I like Barbarians of Lemuria I will probably be picking this up as well.  It is supposed to allow all kinds of P.A. Campaigns. They also recently released Dogs of War 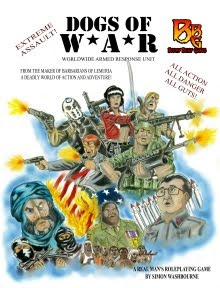 This is based on the "Men's Adventure" novels from the 80's.  Gotta admit it looks pretty cool.  I'm thinking Dogs of War, combined with Barbarians of the Aftermath could make for some cool game sessions, could even recreate some of the Deathlands adventures from that series of books that I read back in the day.
Posted by Brutorz Bill at 8:13 PM