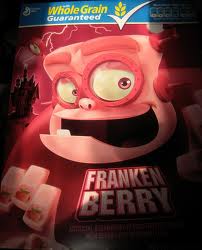 I went to the grocery store yesterday and while I was waiting on "She who must be obeyed" to make a critical shopping decision my mind wandered and I spotted the new Frankenberry Cereal boxes out in time for Halloween and I thought now there is a fun encounter for my games!
I couldn't decide if I wanted to work him up for Mutant Future or for Labyrinth Lord. Stat-wise there isn't much difference (more hit points for Mutant Future, but otherwise little real difference).
The main difference is in his background, specifically of how Frankenberry came to be. I opted to go the Mutant Future route but you can easily tweak him for use in a Gonzo Labyrinth Lord game*. 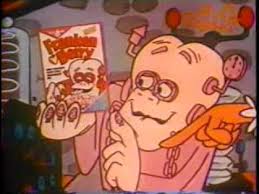 Mutations: Increased Strength (+3d6 damage with melee weapons), Energy Retaining Cell Structure (can do 3d6 electrical damage to anyone touching him 1 x day), Prey Scent (modified): He smells like deliciously sweet strawberries (double chances of encountering herbivores or hungry annoying children), Bizarre Appearance: Pink Skin and the top of his head looks like a butt!, Phobia: Ghosts, Dual Cerebellum-Defective (his second brain is defective and in times of high stress it may take over and cause him to lash out violently), Acculumated Resistance : Cold & Radiation
Weapons & Gear: Chains, Pink clothing

There is some debate as to how the creature known as Frankenberry came into existence. One common theory is that a radioactive cloud met head on with an electrical storm front and that the resulting clash unleashed a barrage of radioactive lightning bolts which struck a particularly large patch of strawberries. The patch contained an assortment of metal junk and not to mention a body or two! Frankenberry was "born"!
Another theory is that a rather insane Count desired the perfect henchman so he opted to make one, assembling a creature from various parts, all designed for strength and power, being low on vinegar and pickle juice to preserve the body parts, the count added strawberry juice to the mix and after exposing the construct to electrical energy, Frankenberry was "born"!
The truth probably lies somewhere in between! 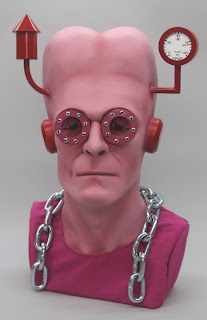 Frankenberry wanders the countryside looking for friends to play with and to share his love of strawberries, when not looking for friends or eating strawberries he paints his fingernails to resemble strawberries, he has gotten quite good at painting his fingernails, but much to his chagrin can't effectively reach his toenails. Frankenberry can be quite flighty, oftentimes scared of his own shadow, but when his dark side takes over he is a terror to behold!
* If I ever get to run an Anomalous Subsurface Environment Campaign I think I'll work him into that, ASE has a nice Post Apocalyptic-Gonzo-Fantasy feel to it that I think this fun version of Frankenberry would fit in nicely!
Posted by Brutorz Bill at 8:14 PM