I've admitted freely on this very blog that I suffer from a terrible case of Gamer ADD.  I'm constantly getting tempted to try out other games, to help me deal with this, I have several notebooks of campaign material that I'm working on at any given time; one for fantasy, one for post apocalyptic, one for sci fi...you get the idea.
Anyways, while I continue to read The Mutant Epoch RPG rules, I'm also working on a Sci Fi Campaign setting using the awesome Stars Without Number rules system.  SWN, is an amazing merger of two of my favorite game engines; old D&D and Traveller, in fact I was seriously considering investing in the Mongoose Traveller books until I discovered SWN (whew saved me a bunch of $$), soo to get to the point of this post.
While the SWN core rules are great, I'd love to see some more alien races and such, easy enough I'll work up my own or convert some of my favorites from various sources. As the mood strikes me and as time permits I'll post them here.
First up is a low-tech race based on a certain character from Marvel Comics original Guardians of the Galaxy series. 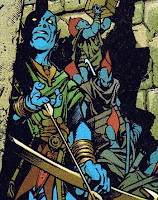 Centaurians are a humanoid race that very closely resemble terran humans in overall build, environmental preferences and general biology, with a few significant differences. They have pointed ears, are blue skinned, hairless and have a red dorsal fin that goes from the back of their pelvis to the front of their forehead. Factoring in their dorsal fin they are nearly 7' tall.


Centaurians have a tribal culture, that in many ways parallels the culture of Ancient Terran Native Americans prior to the European Migration. Their technology is primitive, pre-industrial, with bows and arrows usually being the weapon of choice amongst most hunters and warriors.
The native Centaurian language is a system of grunts, clicks, and whistles. Centaurians can learn to speak English, as well as, other languages but it is painful for them to speak it for an extended period without resting their throat.
Centaurians lack humanity's diversity with psychic abilities, but there are reported to be some individuals said to exhibit some level of psychic power, in particular they often are of the precognitive, telepathic and/or telekinetic disciplines.
Most Centaurians wield a bow, for hunting, defense and war. Their arrows are particularly noteworthy, in that they are made of a rare metal; Yaka that is found only on the Centaurian homeworld. This metal is purported to have certain sound sensitive properties. It is said that a yaka arrow can actually change its direction (but not speed) in response to certain high-octave whistle-sounds that Centaurians can produce. Some human scientists have argued that the Centaurian warriors ability with the yaka arrow is telekinetic in nature and has nothing to do with whistling or sound waves at all. Further research is needed to determine the validity of this claim. But so far humans have been unable to duplicate this ability, Centaurians say humans simply don't know how to whistle properly. For gaming purposes, when a Centaurian uses a yaka arrow and uses his whistling ability to affect the arrow, he is +2 to hit, since the warrior can cause the arrow to zero in on its target and strike more effectively, also for range purposes treat as if fired from an advanced bow. If attacking from a hidden postion their whistling will increase their opponents chance of determining their location.

Centaurians as Player Characters
Centaurians require a Dexterity score of at least 14. Centaurians tend to be from low-tech tribal backgrounds and most avoid hi-technology, creating a Centaurian with scientific skills and talents should be discussed with the GM prior to character generation, such a character will potentially not have the racial whistling ability to enhance their yaka arrows. Due to their dorsal fin, they cannot wear most armor designed for humans and typical humanoid races. Most Centaurians prefer to go lightly armored, except in the most unusual of circumstances.

*Centaurians, Yondu, and yaka are copyright Marvel Comics, no copyright infringement is intended.
Posted by Brutorz Bill at 9:07 PM