After more travel, still slowed by the unconscious Bishop, the party heard noises around a ruined building up ahead, and smelled something that smelled like an unwashed beast. Whatever was ahead of them the heroes were at least downwind from it. Creeping up as quietly as possible, Tink and Sherman spotted a Goatlord. Natorg with his terrible eyesight couldn't see much of anything beyond 50'. The Goatlord was probably the one that had ran away from the big fight the night before. Natorg, after consulting with Helena the dancing hula goddess, came up with a plan. He'd climb up the building and get the drop on the Goatlord they'd spotted, they figured there were two over there from what they could see and hear, Natorg had a poison touch attack he would use, hoping to drop one of the Goatlords while Tink and Sherman would attack from the side.

Tink and Sherman moved into position as Natorg quietly climbed the ruined building and crept across the roof towards the Goatlord below. As Natorg got into position, the smell of unwashed beast grew stronger, peering below, he realized they may have made a miscalculation, there were three Goatlords below, one looking like the one that had fled the big battle the night before, BUT there was also another one of those reptile hounds, as well as, a very large Mutant Boar, that was apparently being used by the goatmen as a mount. It was currently unmounted, but was wearing a saddle and harness. Realizing he might be spotted at any minute, Natorg opted to continue with the plan with a slight change… He leapt off the building onto the Riding Boar's back attempting to attack the beast with his poison touch mutation. While his poison attack was unsuccessful, he did land square on the boars back spooking the beast! Natorg held on for dear life as the enormous boar charged out, knocking over a Goatlord and the repti-dog. Tink and Sherman launched their attack, surprised by the boar running amuk but not wanting to lose the advantage of surprise, they quickly attacked, the injured goatman was taken down quickly, and the repto-dog driven back. Natorg somehow managed to get control of the Battle Boar, and steered it back into the remaining Goatlords, apparently they hadn't treated the beast very well and it was all too happy to tear into them with an almost gleeful ferocity. With Natorg leading a mounted attack, the party quickly eliminated their foes. Only the scaley hound survived wounded but alive it fled into the ruins. They looted the Goatlords, but were disappointed with the minimal loot that they found; this group was obviously a scouting party that had just met up with the lone survivor of their raid on the Goatlord base.
Natorg, spent a bit of time bonding with the boar, he fed it some rations and gave it some clean water. Natorg quite quickly found he had made a new friend. He named the mutant boar Fido. With renewed vigor they set back out on the trail. Fido even allowed the still unresponsive android Bishop to ride on his back; this sped up their time considerably.
While they were indeed making much better time now, Bishop being incapacitated had slowed them down considerably, the wheelchair had helped, but having to use it had required them to take a slightly different route than the one they had previously taken, the one Sherman had mapped out both in his head and on paper. Tink wasn't happy either, they had covered the manholes and other sewer access points before on their way to rescue Brother Thomas, now they were in unfamiliar territory, Trog Territory and nightfall was fast approaching! Maybe it was just their imagination but they could swear they could hear rustling from below their feet. They scanned about desperately for a suitable place to camp (hide) for the night. Even Fido was sniffing the air, his ears laid back. Finally they spotted an old church that seemed to be fairly intact, at least compared to the surrounding buildings. Even a bit of the stained glass was still lingering in the windows of the old house of worship. Quickly they went inside; luckily the main front doors were large enough for even Fido to fit through, while he didn't rush inside he wasn't too hard to convince to go inside. Whatever he smelled outside in the coming night air definitely had him spooked. They hurried inside and closed the heavy doors behind them, desperate to put something between themselves and the night dangers outside. 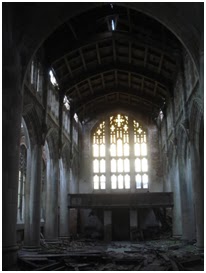 As they entered a few rats scurried about.  It seemed at some point someone had tried to fortify the church, pews were stacked against the windows, and some windows were even boarded up, though it all looked to have been done a very, very long time ago. They looked about in the gloom.  Fido couldn't go far into the old church and Natorg spoke soothing words to the beast, calming it.  Both Tink and Sherman were impressed with how quickly Natorg had bonded with the beast.  Battle Boars were known for being temperamental and moody under the best of conditions, yet Fido and Natorg were already becoming fast friends.   Tink noted the main altar of the church was not only intact but remarkably clean.  Not a bit of dust or debris was around it.  While rat droppings were visible all about the old church none were near the vicinity of the old altar.  It even appeared to have been swept very recently.  Sherman found a door leading below to the cellars, opening it he saw only darkness below, though the sounds of rats were quite apparent both below and in the walls.  Brother Thomas looked about the ruined church and muttered something that sounded like…Catholic…but he didn't elaborate and the others were too concerned with their current situation to ask what he meant. Dropping one of the glowsticks, they had "acquired" from the Goatlords, into the dark cellar they saw the stairs below had collapsed and the floor down below was swarming with Rats!

A shudder went down their spines. Tink and Sherman discussed their situation, darkness was upon them and they could hear the distant baying, howling of Trogs carrying across the night air. While the rats could be a problem, they knew that to travel at night in the heart of Trog territory would be suicide. Even with Fido, they'd never make it. The beast couldn't carry them all anyway and Bishop while showing some signs of improvement was still unresponsive. They placed the unconscious android into a small closet area (Brother Thomas said something about confessional??) and they prepared for the worst. They convinced Brother Thomas to hide in the altar, knowing if he was lost the whole mission would be in vain. Natorg managed to turn Fido around so that he faced the large entry doors. They tried to barricade the entrance further, but knew in their hearts if the Trogs caught their scent, they'd be hard pressed to keep the nocturnal mutants out. As they did all this, the sounds of the Trogs grew louder, Fido snorted nervously, the beast seemed to have quite an enhanced sense of smell, and whatever was about was spooking the large boar. Tink in spite of their circumstances was curious about the altar. Someone had maintained it…but why? He noted there was an offering plate on the altar. He absently fiddled in his pocket found a few old coins and placed them in the offering plate. Sherman thought the gesture odd, but had bigger concerns. They both then did their best to bar the cellar door below, fearing what might come up from below, while they hoped to somehow make it through the night without incident.

That was not to be, had Fido with his beastly animal odor not been with them perhaps the Trogs might not have found them, or maybe it made no difference. Regardless, the Trogs found the small band of heroes, the heroes shuddered, coming from all across the ruins, they could hear howling, scraping and clawing. Fido snorted nervously, wanting to bolt but Natorg kept the beast calm. Sherman risked a peek through a crack in the ancient walls of the old church and spotted several of the creatures skulking about just outside, with even more visible across the street. Many were pouring out of a manhole just a short ways away. It wouldn't be long now!
To be Continued...
Posted by Brutorz Bill at 1:49 PM