I love D&D, well ok guess I need to clarify that statement, I love D&D/AD&D pre-AD&D 2nd Ed., I enjoy AD&D 2nd. ed., had fun with 3.0  but have moved on and probably won't date er.. I mean play it again, wasn't in the mood for 3.5, can't stand 4.0, enjoy playing Pathfinder with the right group (ooh shiney!) but won't DM it... Sheesh, when did gaming become so confusing!  Remember when saying you played D&D created a specific image of a shared gaming experience?  Now take Gamma World, as I've said before, I actually GM'ed Gamma World before I ran D&D.  My favorite edition of Gamma World was the 4th Edition, no not 4E, but the actual 4th Edition of Gamma World, you know the one where they first tested doing away with Thac0? So if I say let's play some 4th edition Gamma World, people think of the latest release (4E), with cards, and cockroach yetis?!! Not what I'm talking about playing at all. While some would say the OSR confuses the issue even more.  I don't think this is the case, for me one of the cool things about the OSR Movement is that I can get back to that shared gaming experience, without having to overly elaborate.  So when I say Labyrinth Lord, or Swords & Wizardry people know what I'm talking about, same thing with Mutant Future.
I know things change, but I learned the hard way, posting an add for players looking for Old School gamers without elaborating further or including some OSR nomenclature means all kinds of different things to different people.  Heck I was told the other day that 3.5 is old school gaming, wow... I'm getting old. 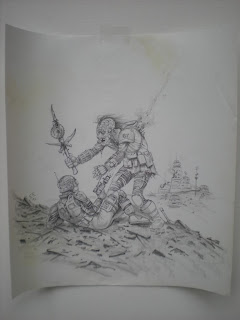 Found this cool bit of original Gamma World artwork by Fred Fields over in Kevin Wirsing's Comic Art fan gallery, please, note some of the other pictures on his site are NSFW.

Oh, and please don't think I'm trying to start an edition wars battle on my blog, that's the last thing I'm interested in, just felt like doing some pointless ranting for a bit today.
- Good Gaming to All!!  Old School and New School Alike!!
Posted by Brutorz Bill at 6:38 PM