On a recent bookstore trip, I spotted a Gamma World novel on the shelf: Sooner Dead. 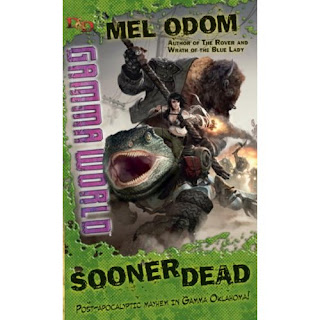 I picked it up, knowing I had some airplane reading time coming up soon.  Let me clarify my stance on Gamma World and the latest edition before I proceed with my brief review.  I've been a big fan of the Gamma World RPG since I picked up the first edition of it back in 1979. However, the latest edition of Gamma World just doesn't interest me. It doesn't seem like "my" version/vision of Gamma World. Even on the back of this book it says this "isn't your father's Gamma World!"...Indeed its not!
Up until recently I've been running a Mutant Future Campaign, so I was hoping this might give me some campaign fodder for my games. I like a good story, so I was curious about this book and so I bought it.
Sooner Dead is a decent read, the pacing is fast. The writing is clear and I found it to be a fast read. I do have one peeve in that the author regularly ended each chapter by trying to create a cliffhanger effect, which would then be immediately resolved on the next page.  It got quite annoying after the first few chapters.  The characters were for the most part interesting and the story was pretty good.  I would have preferred more mutants, beasties etc.. The two main characters were interesting.  A few of the "NPC's" had powers/abilities, there is a "fire-guy" and a "gravity-guy", there was a Gorilla Man, and a bug man, but not alot of mutants and mutations other-wise.  Also the setting didn't seem very PA to me.  There was normal natural flora and fauna in abundance, with odd beasties feeling out of place when they were encountered instead of it seeming like a world gone mad with rampant mutants and monsters. But in the end it was an ok read, nothing earth shattering, but ok.  Particularly as a distraction from the fact that I was stuck at the airport waiting for a delayed flight.  Boy does flying SUCK now or what? sorry.. ahem...
Anyways did it make me want to run out and play the new Gamma World?  No. In fact it seemed more like a Rifts story (minus the mega-damage) to me.  It actually made me wish I hadn't sold off some of my Rifts collection.  Heck the Bisonoid character "Stampede" could be fairly easily created with the Palladium After The Bomb rules and a few powers from Heroes Unlimited.
Just my 2 cents. YMMV.
Later,
Bill
Posted by Brutorz Bill at 8:25 PM