My girls needed some specific books for school, I found most of them at the Used Book store and Goodwill store that I frequent but a couple were proving hard to find.  So we trotted off to the Barnes & Noble.  I don't frequent it too often, you see I LOVE books!  And can quite quickly spend more money than I should in such a place.  Anyways, we found both the books they needed (for cheaper than what the school would have charged us). Of course, I found some books that I didn't need but picked up anyway. On the way out I just "happened' to walk through the discount book section and spotted.  This book: 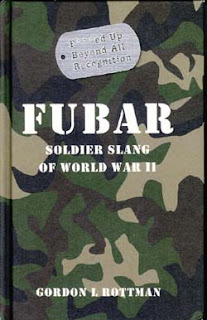 It was less than $5 so I had to pick it up.  My grandfather was a WWII veteran, so I've always had a distinct interest in that era.  The book is full of some really cool military slang from that period.

About the Book (taken from the Osprey website)
About the book

FUBAR: F***ed Up Beyond All Recognition
Soldier Slang of World War II
by Gordon L Rottman

F***ed (or Fouled) Up Beyond All Recognition – a typical situation appraisal by wartime soldiers.
The soldier slang of World War II was as colourful as it was evocative. It could be insulting, pessimistic, witty and even defeatist.      FUBAR: F***ed Up Beyond All Recognition is a compact dictionary which takes a frank look at the Commonwealth, American and German slang used by the men on the ground and shows how, even in the heat of action, they somehow managed to retain their sense of humour, black though it might have been.

This is a great book to have both from a historical perspective and for those gamers playing campaigns in this era.  I'm quite happy to have it on my bookshelf.
Posted by Brutorz Bill at 10:02 AM