I recently read where Goblinoid Games has acquired the Starships & Spacemen RPG and will be releasing a LL/MF Compatible version of the rules some time in the future.  I think this rocks!  I see all kinds of genre mixing possibilities!  Since the S & S setting has a strong basis in Star Trek : TOS I thought I'd celebrate this by working up a beastie from the show that I really liked and felt was quite appropriate for Simian Saturday!
The Mugato!! 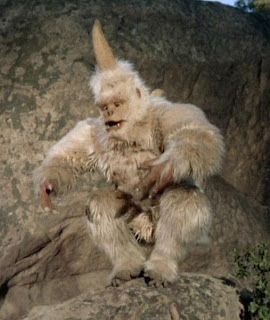 No. Enc.: 1 (1d4 rarely)
Alignment: Neutral (Some would say Chaotic)
Movement: 120'/40'
Armor Class: 5
Hit Dice: 5
Attacks: 3 (Claw/Claw/Bite)
Damage: 1d4/1d4/1d6
Special Attacks: Rending (if the Mugato strikes its opponent with both hands the ape beast does an additional 1d8 points of rending damage), Poisonous Bite (Deadly Venom! must save vs. poison or will suffer a slow painful death that could take several hours (1d8))
Save : F4
Morale : 9
Hoard Class : None (could harvest horn and spines for weapon use/trade)
Mugato are large savage apes. They are covered in a thick white fur and have a large horn protruding from the tops of their heads (primitive humanoid tribes have been known to fashion these horns into weapons). They also have a ridge of pronounced spines running down their backside. They are carnivorous and extremely aggressive many are said to actively hunt and eat humanoid prey (humans in particular), apparently having developed a taste for human flesh. In addition to their claw and bite attacks, Mugato have a frighteningly deadly venom in their bite. Many Mugato will ambush their prey, grappling them to the ground and bite them in an attempt to inject their venom into their prey. They will then either devour their pain wracked victim or wait out the poison to take effect depending on the circumstances and their mood. 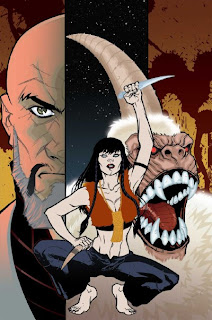 The Mahko Root (gee looks like *Poo* to me) is the only known cure for a Mugato's venomous bite and even then only when administered by a female shaman of the Hill people (and in true Kirk fashion the higher her charisma the better). An elaborate ritual (which is apparently supposed to be rather "suggestive") is performed with the shaman applying the root directly to the wound. Oh and as a side note the victim cured by the shaman now owes the shaman their life and by the laws of the Hill People is bound to them. 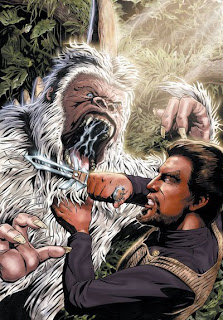