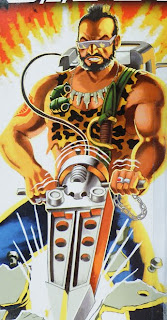 Weapons: knife M+2L, Assault Rifle 10L w/ jagged bladed bayonet M+7L,
Armor: None
Clothing: boots, ripped sleeveless yellow camouflage shirt, light blue jeans.
Gear: sunglasses, mechanics tools, Jury-Rigged “Jaws of Life” w/ power source, necklace, Case of Grape Soda. He may have other weapons gear (even grenades) depending on the gangs recent raids, he is hard on equipment and most gear doesn't last long in his possession.
He has a Motorcycle that he has “enhanced”. He has increased its Toughness (+2), Speed (+1), and made it off-road capable. 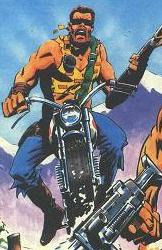 Ripper is mean, nasty and is the epitome of anti-social behavior and those are his good qualities. Since a young age Ripper has been a vicious criminal. He worked his way through several nomad gangs, none could handle his surliness and nasty attitude, until he met up with a group that met his cruelness with equal bile, the group became the Dreadnoks, Ripper is considered a founding member of this feared raider gang. Not noted for his smarts, there is some debate as to whether or not Ripper or Torch are the dumbest members of the gang.  Ripper loves violence and tearing things up! Oh and he's also partial to grape soda and chocolate covered donuts!
Ripper and Dreadnoks is copyright Hasbro corporation. No copyright infringement is intended.
Posted by Brutorz Bill at 9:08 PM