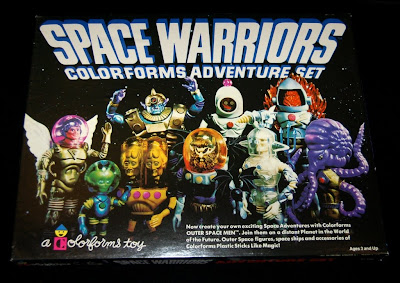 When I was a kid I had this awesome colorforms set... I know I am showing my age, some of you may not even know what "colorforms" are. Anyways it was this awesome set of these Space Aliens.  The cover of the box looked like a picture of actual action figures.  I soooo wanted those figures. But never found them...
Well fast forward many many years later and I've found them! Sort of! Turns out the figures were done back in 1968 and were well received but additional releases never happened. But the original line inspired how action space figures were to be done for generations.  Now 42 years later they are back!
The Outer Space Men
They are being released as 3 3/4" action figures, including a graphic novel.  The art alone give me all kinds of ideas for gaming!  I see great RPG potential! 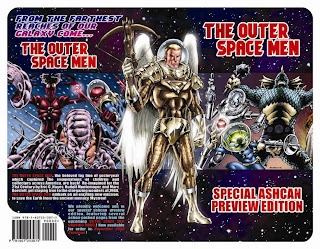 Follow the above link and check out the gallery picture of
Astro-Nautilus!
Might could use Goblinoid Games upcoming LL compatible Starships and Spacemen rules along with a healthy dose of Mutant Future to play an Outer Space Men Campaign...or Savage Worlds might be the way to go!  Hmmm now wheres my copy of Slipstream!  Mwha ha ha!!
Oh sorry anyways I just thought this was cool and brought up some ancient memories from my childhood.
Posted by Brutorz Bill at 8:09 PM