I recently ordered the Pitford Sourcebook for The Mutant Epoch RPG.  My copy arrived this week and while I haven't had time to read it cover to cover I have to say, I am already quite impressed with it. 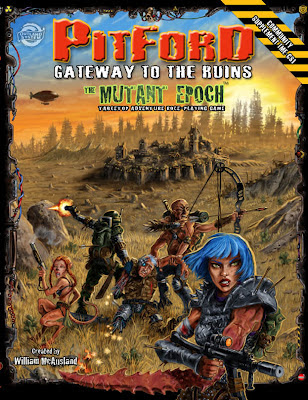 The cover drew me in immediately, it shows a band of adventurers (called Excavators) clearly in trouble, desperately trying to make their way to the "refuge" of Pitford off in the distance... I found myself wanting to know what they were running from, would their mangled cyborg companion make it? Would they survive to journey into the ruins another day??
Diving into this tome, proved to be a further visual treat.  William McAusland has turned out another product that is jam packed with awesome art that really captures the feel of the setting. He has a real talent and Pitford is loaded with maps, character illustrations and some great action scenes, but there is more to this product than just the artwork.
So what is Pitford you ask?
Well every group of explorers, adventurers and excavators needs a home base right? Somewhere to rest up, heal up, resupply, sell off loot, have a beer, recruit new members etc... Pitford is that and oh so much more!
This isn't your Daddy's Keep on the Borderlands! Ok that sounded weird, but seriously I can see that classic D&D module's subtle influence, a fortified stronghold near a vast dangerous dungeonesque wilderness.  Pitford is not just a place for the party to hang out in between adventures but can be a campaign in and of itself.  It is filled with NPC's, shops, adventure hooks and more! The book (like the Mutant Epoch core rulebook) has tons of random tables to roll on to help the Game Master make the community come alive.
Staying at the Last Resort Hostel?  Good luck going to take a leak during the night! Or even worse what if your band of excavators doesn't quite make it back to the gates of Pitford before they closed at dark? What might lurk just outside the gates at night, preying on weak and injured excavators! Tons of random tables to help you fill in the gaps and more! One slight word of caution, there are adult themes in this book; slavery, drugs and sexual encounters are in some of the encounters and descriptions in this book, but you can skip/ignore those if you wish too without losing the coolness of the setting.
This is a great resource, not only for The Mutant Epoch RPG, but for most Post Apocalyptic RPG's that you might be running/playing; Mutant Future, Gamma World (any edition), heck with some tweaking I can see using this in a Rifts game, particularly the Rifts I played, back in its early days,before Palladium went all uber tech and world book crazy, but I digress, Pitford has minimal mechanics in it, so you can easily use the NPC's and locations in your P.A. game of choice, but I personally think The Mutant Epoch RPG is pretty Damn Awesome in and of itself and recommend you trying the TME rules out!
Anyways, thats my mini-review of Pitford.  I plan on posting more Mutant Epoch content on my blog soon, so until next time, Good Gaming!
Posted by Brutorz Bill at 9:29 PM