Needles over at the Swords and Stitchery blog has been making me look bad, posting Stars Without Number goodies like a mad man!  : )
He reminded me I haven't done much real posting in awhile, especially for Stars Without Number, so seeing as how he has "thrown down the gauntlet" so to speak, I thought I'd post a new Alien for my ongoing SWN/Marvel/DC Aliens Series.
This one even ties into (not so subtly) a certain Cosmic Entity he mentions on this list.
Anyways without further ado, I present a somewhat more obscure Marvel Universe Alien race;
The Quwrlln 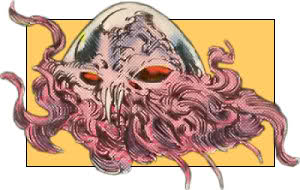 Lenses: Sagacity, Fear, Pacifism
Government: Oligarchy; Council of Scientists
Technology Level: 4 (but they have made higher level advances in experimental teleportation technologies, if they pool all their resources on a global scale they can achieve teleportational marvels that come close to tech level 6, they also have achieved great advances in Bio-technology some of which are tech level 5)
Motivation: Knowledge, Species Survival

Quwrlln are a race of sentient cephalopods, averaging 3' tall and 98 lbs, with pinkish, translucent skin and multiple tentacles. They are considered to be a very old species in the galactic scheme of things. They have been called the scientific students of the universe. A large segment of the Quwrlln scientific community (which is a majority of their overall population) is focused on preventing some future catastrophe that they believe is coming, (something potentially even more devastating than The Scream), they are devoted to preventing this thing/event from happening, or more specifically, from affecting their race. They refer to this event/thing as "The World Devourer". While they are not an inherently evil race, they are not above using and manipulating other races to forward their goals (the end justifies the means, and they feel their entire species' survival is at stake). While there are Quwrlln that are not focused on this occurrence, these are considered outcasts, mentally unstable, delusional, not devoted to the common good of their race, etc.
While the Quwrlln do their best to avoid violence, especially physical violence they are not by any means helpless. A Slaver fleet, (no doubt working for the Deonists) brazenly sought to attack a Quwrlln world, thinking the Quwrlln's peaceful nature and psionic potential would make for easy pickings and fetch them a high price with their masters. The entire fleet upon orbiting the planet and making their demands was caught by some sort of teleportational wave weapon and simply disappeared! Rampant speculation continues as to what happened to the fleet but no one knows for certain and the Slavers have left the Quwrlln alone ever since.
Also note that while the Quwrlln are a pacifistic race, they are not above using other races to do their fighting for them. There are reports of Quwrlln using their advanced bio-science skills to enhance the abilities of other aliens and pit them against their foes.

SWN Default Campaign Notes: The Quwrlln were devastated by The Scream, their civilization was ripped apart. It has taken them the centuries since The Scream to recover and they still have not regained the level of technology that they once possessed.
Psionics: Prior to The Scream over half the population (65% +) of Quwrlln exhibited some form of psionic ability, in the centuries since, they have slowly began to recover their psionic potential, roughly 35% of Quwrlln alive today possess some psionic abilities, but even those don't reach the pinnacle of achievement that this race once possessed.

PC Quwrlln:
Few Quwrlln are ever encountered away from other members of their species. But there are those rare individuals that reject their race's obsession with preventing some future calamity and pursue their own ends. However, most of these "rogue" Quwrlln still embrace their race's pacifistic tendencies. Because of this no Quwrlln can be of the Warrior class.
Stats: Quwrlln must have a minimum Intelligence of 14. Due to their higher intellect and scholarly training they gain an additional +2 on any Skill Checks related to Intelligence. Psionic Quwrlln can waive this bonus and instead get an additional Psi Point.
Multiple tentacles- Quwrlln possess multiple tentacles and with these can hold 3x more objects than normal; were it not for their pacifistic nature they could also get one additional attack per round, but they may use their tentacles for one additional action per round or to add +5 to their movement. Their tentacle-like limbs also make them expert grapplers (+2) to the attempt but they would never perform a grapple attempt as a physical attack.
Mucus Membrane – Quwrlln are covered in a slimy mucus membrane that makes them hard to grapple (-2 to any attempt to grapple them),

Special Thanks to Matt over at The Land of Nod.
I used his Mollusk alien as a template from his Space Princess RPG. : )
Posted by Brutorz Bill at 1:35 PM