We didn't meet to play Pathfinder today, so I took the time to work up another Marvel Universe alien race for Stars Without Number.  I didn't have much to go on for this race so I extrapolated a little bit, hope you enjoy.  And as always please let me know if you use any of these in your games.

Entemen
Lenses: Greed, Treachery
Government: Multipolar; Trade Guilds, Crime Bosses
Technology Level: 4 (actually a high 3 but they have managed to "acquire" i.e. steal higher technologies)
Motivation: Power, Wealth, Recognition
Entemen are a tall (average height 6'6") humanoid/octopoid race with dark yellow to orange skin with darker spots and large pointed ears. Instead of arms and legs they have tentacles.
Entemen have a racial knack with all things criminal, in fact the race has a bad reputation among other aliens as being criminals. But this is not always true. Many Entemen are not criminals and in fact some go on to use their skill and knowledge of crime to become skilled (and quite honorable) law enforcement officers. But the negative stigma of their race is hard to shake. 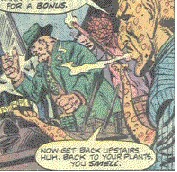 Entemen have shown a fondness for Old Earth 1930's Era Mob and Gangster movies and many try to emulate the behavior from that period, even setting up their criminal organizations to resemble that era (or at least how that era has been portrayed in holo-vids and popular fiction).

Roll ability scores as normal: 3d6
Not having multiple fine manipulative digits causes Entemen some issues when attempting to engage in skills that require such. Generally an Entemen is at -2 when trying to do intense, complex fine manipulation skills, but if the Entemen can bring his "feet" into play this penalty is negated.
Their tentacles allow them to be superb grapplers, gaining a +2 to any attempts to grapple with a foe.
Entemen have large pointed ears which provides them with slightly better hearing than humans, any attempts to Listen receive a +2 bonus.
Automatically has Culture: Criminal: 0 and Culture: Criminal is always a class skill. When dealing with criminals and the criminal element they get an additional +2 to their Charisma rolls.
This can also work against the Entemen. Having a reputation as criminals causes other races to question their motives and purposes. When interacting with others for the first time (particularly those in authority and law enforcement) all Charisma interaction attempts are at -2 (ya just can't trust those Entemen), after the Entemen has had time to "prove his honesty" to others, charisma interactions will be normal, but they still can turn up the charm when dealing with criminals.
Entemen can possess psionic ability but as a species show a slightly decreased occurrence of having psionics when compared to humans. Those that do possess psionics are often criminal leaders and masterminds (no big surprise there).

I added (made up) the criminal part to this race. The one Entemen I read about Mr. Slech in Marvel Presents #5 was an inmate on a prison planet that led a gang of prisoners. : )
Posted by Brutorz Bill at 7:39 PM