HELLCOW! ; an undead beastie for your OSR Games!

The wife and I went to see Underworld today, which got me thinking about vampires in games which gave me a crazy idea!!! 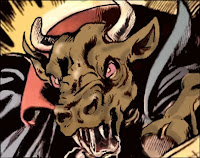 AKA: Bessie, Blood-Beast, Cowled Cow, Farm Killer, Recreant Ruminant
No. Enc.: 1 (believed to be unique)
Alignment: Chaotic
AC: 3 (16)
HD: 7
Attacks: Bite (1d8 + level Drain), Butt 1d8
Saving Throw: F9
Morale: 10
Move: 240' (80') Fly: 180' (60')
X.P.: 2,8000
Whispered legends tell of a dark night when the Lord of Vampires was unable to find a human victim to feed upon, one farmer had failed to lock up his favorite cow; Bessie, the Lord of Vampires took his fill from the poor beast, and it wasn't milk he was after! The farmer finding his beloved cow dead the next day couldn't bear to eat her so he buried her. Three nights later, Bessie Returned!!
Bessie doesn't have quite the powers of a regular vampire, but for a cow she is one tough cookie, the fact that it was the Lord of Vampires himself that created her has given her some unusual abilities. First and foremost it wasn't believed that regular cattle could become vampiric, she proves this wrong. Her vampiric state has increased her intellect, though still below the average human in intelligence she is smarter than a regular cow (can set up ambushes; seek out specific targets etc…)

Hellcow is immune to charm, hold and sleep spells. Electricity and cold does only half damage, she is unaffected by normal weapons, and regenerates 2 hit points per round. Like regular vampires she must take refuge from the sun during daylight hours and once in awhile she must sleep in an old barn to maintain her powers' vitality. Like other vampires she can assume gaseous form at will and can grow large bat-like wings enabling her to fly. Bessie can feed upon humans and cattle, but prefers to feed upon farmers, possibly due to some resentment towards her former owner who left her out that cold night so long ago. It is believed that Bessie cannot create more of her own kind. Bessie can summon 1d10x10 bats when underground, although she seldom goes underground. If she can summon wolves, she has never done so; perhaps being a cow in her previous life makes her uncomfortable around them. Bessie has on rare occasions exhibited the Charming Gaze of a vampire but those attempting to resist it get a +2 bonus to their roll, because..well she's a cow! Bessie has the other abilities and weaknesses of vampires with the addition that a weapon forged from a milk pail will strike her as though it were a magic weapon!
Legend has it that Bessie's vampiric blood-infused milk has various restorative properties to those who drink it. It can purportedly Cure Diseases and even Restore energy levels lost from the attacks of other undead creatures (possibly even Bessie's own attacks) although its full effects are unknown.
Bessie has a distinctive laugh,"hahahamoooo!" 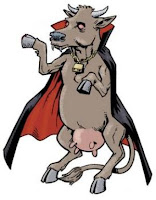 Based on the Hellcow character from Marvel Comics, no copyright infringement is intended!
Posted by Brutorz Bill at 5:33 PM