I recently posted about Palladium offering a sneak peak of a new Heroes Unlimited supplement Armageddon Unlimited.   Well they've got another preview out for a soon to be released book; Thundercloud Galaxy. It is for their Rifts setting, but if it's like some of their other space setting books (Phase World, Anvil Galaxy etc.) it should be useful for non-Rifts gaming purposes.  I'm hoping to pull stuff from it for my eventual Stars Without Number Campaign. Who knows I may even eventually talk the guys into playing a Space based Heroes Unlimited Campaign.  : ) 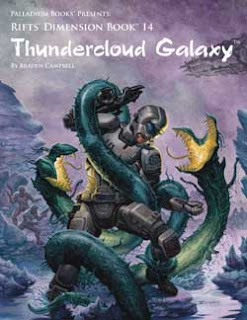