Not sure this will be a regular blog feature, but thought I'd post some of the Post Apocalyptic RPG related items that I've come across of late.
While I am continuing to have a blast with Labyrinth Lord, I don't want to let some news on the Mutant Front get away (hmmm the Mutant Front? now there's a campaign idea!, oh sorry back on track). I've gotta be careful, I've got the dreaded Defect of Gamer ADD that I must keep in check!

I've recently gotten an update that The Mutant Epoch RPG is slated for a late October release.  I've chatted with these guys a bit, they are some great folks, the artist did alot of the Goodman Games DCC's back in the 3.5 era.

On the Mutant Future front, there are some great products in the pipe from Skirmisher, I can't really say much about them (I'm such a tease), but I don't think Mutant Future Players will be disappointed.

Dark Horse comics will release the new Samson Post Apoclyptic Comic series in December.
Trey gives a great write-up about the original series on his blog. (special thanks to Jay for pointing out the new comic series coming out).

I recently found where WotC will be releasing some fiction for the new Gamma World game, old news but I just now found it. I have deliberately NOT posted my opinion about the upcoming Gamma World game, I think I'll continue that trend for now...

And on my latest trip to the FLGS I spotted the below item on the shelf! 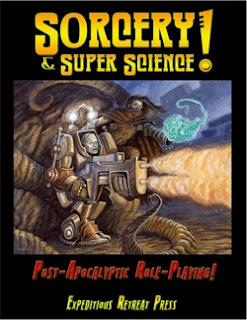 Of course I had to pick it up! I can't read it yet though, I don't want to get thrown off track from my Labyrinth Lord Campaign. The map on the back is sweet, all kinds of kingdoms and nations that I really want to know more about! Anyways just thought I'd share the radioactive love with the mutant masses!
Good Gaming -B
Posted by Brutorz Bill at 6:53 PM