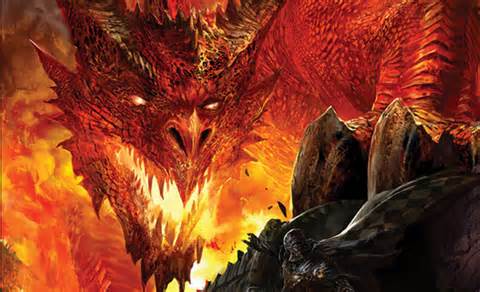 Well I have to admit I was skeptical, I didn't participate in the play-tests, didn't follow what was going on with the development of 5E on blogs, or Google+ or Forums, I intentionally avoided pretty much anything to do with D&D Next.  Not that I was bitter or mad (well I did get mad when Dragon Magazine stopped coming to my mailbox) or anything, but to be honest I felt with 4E (and to some extent even 3.5) that WotC no longer considered me to be a part of their demographic.  I'm not a hater or an Edition Wars guy or anything like that, if you have an edition of the game, or a retro clone that you like and have a group that enjoys it then I'm happy for you. To be honest for me the quality of the players/group has always been more important to me than the rules system being used.  But I do want to use a rules system that allows me to run the kinds of games that I enjoy. I did try 4E, bought the books ran a mini-campaign, and eventually shook my head and sold all of my 4E books (no small thing for me, I still have all of my AD&D books and modules), it just wasn't for me or my group. For several years now, I've been content to play various retro clones (C&C, AS&SH, LL, B&T, DCC etc.) and even dipped my toes into Pathfinder for awhile.  Part of my issue is a personal one, I find I have an annoying case of Gamer ADD, with all the retro clones out there, I was frustrating my players (and myself) wanting to try the latest OSR Clone that was out, and I have to admit some GREAT ones exist ( B&T, AS&SH; I'm looking at you guys!). So that brings me to my current state, I've lost some players due to jobs, moving, personal issues and  I've been away from active gaming for a bit now, have had a few great one-shots and short 2-3 session games here and there. Even posts on my blog have diminished (although to be fair work and family have been a major influence on that). So to fast forward...
A friend of mine has been singing the praises of 5e for a bit now (he was very active in the various play-tests), I always smiled, nodded politely and changed the subject.  Well that has changed.  At Free RPG Day I got to participate in a 5E game.  I got to play. I was handed a pre-gen, given a brief (very brief) run down of the 5E rules (Advantages, Disadvantages, Short Rests, etc...) and we started playing. And it was FUN!  I was back in the game!  One of my other friends a regular player in my various games and a DM in his own right joined us, and he had a blast also.  It was FUN!!!
But I was still skeptical, this was a playtest, not the final version.  I did order the Starter Set, I mean for $12, I couldn't resist, heck the dice in the set alone cost nearly that, well half that at least.
Now the Basic rules have been released, for Free!  I downloaded them, liked what I saw, sure there are a few things here and there that I may change, but the rules work, they have pulled some modern bits and pieces in but the old deep roots of the game that I know and love are still there.  Yesterday I uploaded the Basic DnD Files to Office Depot and with a coupon got them to print it up for $11, by yesterday afternoon I had the Basic Rules in hand, hopefully the booklet will fit into the Starter Set box when it arrives.
But the most important thing, I'm feeling creative again,  the ideas are flowing, I've got my muse back, while everyone was still asleep this morning I got up early and got to creating stuff! I'm ready to play D&D Again!  And you know what it feels Good!  : )