I've been reading my copy of Starships and Spacemen 2nd ed. a bit.  Thought I'd try my hand at writing up an obscure alien race from TNG. 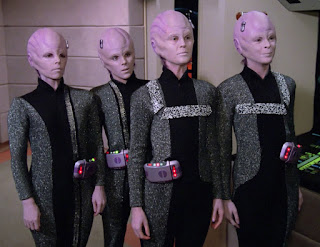 Requirements: INT 12
Ability Adjustments: STR -1, INT +2, CHA-1
Skill Adjustments: Combat -1, Technical +2
Metabolism: Cobalt Based
Bynars are a race of short humanoids (averaging a little over 5' tall) with lilac skin and enlarged skulls from the planet Bynaus in the Beta Magellan System. They are relatively new members of the Galactic Confederation. 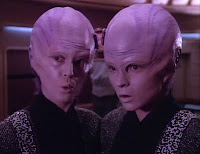 Shortly after birth all Bynars undergo a procedure where their parietal lobe is surgically replaced with a synaptic processor. This processor connects them to the Bynaus Master Computer. It has been speculated that they are so interconnected with their Master Computer should anything ever happen to it, they would die. Due to being so interconnected with the master computer their language and thought patterns are as close to binary code as possible for organic beings. They can and do speak the Confederation Common tongue but pairs will quite regularly finish one another's sentences, often to the dismay of other races interacting with them.Even their names are a series of 1' and 0's. When speaking directly to one another they utilize a high pitched sound that is inaudible to other races. Each Bynar is equipped with a buffer to safely manage this high rate of information transfer. Bynars always work and live in pairs. Bynars are genetically bonded in pairs for life, should one of the pair meet an untimely accident the surviving Bynar must return to Bynaus where they will be matched to another (without a bonded partner a Bynar performs all actions at -2, until matched with a new partner). When working in pairs Bynars each get to roll 1d6+1 for the number of questions they may ask the computer at a given time.

Even though they are still fairly new members of Space Fleet, paired Bynars can sometimes be found at larger Star Bases, usually engaged in computer repairs and upgrading Space Fleet's Starship computers.

Obviously I took these from Star Trek The Next Generation. I think they only appeared in one episode TNG: 11001001

I'm not sure Starships and Spacemen 2nd ed. is going to replace Stars Without Number or X-plorers as my Sci Fi RPG of choice, but this was a fun exercise and these guys were pretty easy to stat up.
Posted by Brutorz Bill at 6:46 PM