Sorry for the delay in finishing up this series of posts, I've been having to work out of town alot lately which is unfortunately messing with my gaming/blogging duties.  : )
Part 1 can be found here.
Part 2 can be found here.
So now to work this info up for Stars Without Number… 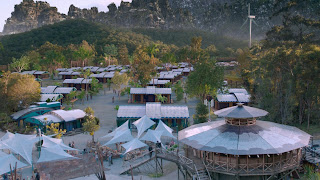 Places: Ancient Pyramid (Sacred "Medicine Lodge"), Sacred burial grounds
Balam is a warm temperate world with a hostile biosphere, its native wild-life is reminiscent of Terran Dinosaurs.  A growing colony of humans are working to survive and carve out a niche here, and in spite of the dangerous flora and fauna, hostile natives and a recently arrived faction of alien raiders, the colonists are not only surviving but to some degree thriving.
Balam is also home to a race of primitive feline aliens that have a definite dislike of the human intruders, but after a viscious battle at the (now ruined) town of Grimmville, the Balam natives have a healthy appreciation (respect) of the humans hi-tech weapons, however, its only a matter of time before there is further conflict.  Aggravating the situation is the recent arrival of a band of alien mercenaries (Threskians) that prey on both groups, but are particularly cruel to the Balam natives (the Threskians have a racial prejudice against feline races).
Most offworld credit is earned by trading with those who have goods to sell with no questions asked.  While not able to pay top credits for most items, Balam's colonists are in too tight of a spot to get too nosey about where a visiting "trader" picked up his wares, also some credits are earned from the occasional visiting big-game hunter that tries his luck against the local wild-life.


The Warlords of Khenennu are a band of Threskians (a race of avian humanoid aliens) driven into exile from their distant homeworld in another sector  They are elite soldiers trained in sabotage and quick military strikes, the WoK have established a base somewhere on or near Balam. They are equipped with hi-end tech level 4 gear (including some Psi-Tech equipment), but currently lack the means to replace lost equipment, although they can repair their weapons and gear. They raid the local natives and sometimes the colonists whenever they need supplies or the mood strikes them.  Many of the members are said to be psychic and they use their abilities to full effect when conducting their military-precision raids. While currently a small time player in the sector scheme of things they could prove to be a growing threat, particulary if the right patron opts to retain them.

So there you go, I used the colony generation tables in Rifts Thundercloud Galaxy, a roll in Aliens Unlimited gave me the Threskians and a quick roll in After the Bomb provided me with the jaguar natives, mixed in some TV and movie influences, stirred a bit and now I have what I think is a pretty interesting planet to plop into my SWN Campaign.
Posted by Brutorz Bill at 12:09 PM