Recently I read a post from a fellow blogger over at Outsyder Gaming.  He talked about using the random colony generation tables from the Rifts Dimension book Thundercloud Galaxy, which reminded me of my post about using Thundercloud Galaxy as a resource for Stars Without Number. After a recent visit to a used bookstore I scored several Palladium products for dirt cheap.  So I thought I'd play around a bit today and see what I could come up with for my SWN Campaign.  Consider what follows to be a very early draft. I'm initially using the Thundercloud Galaxy Colony creation tables, but will indicate when and where I am using other resources as I move forward with this. 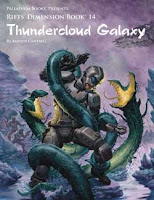 Basic Premise: The planet will be somewhere in a sector that I haven't worked up yet for a SWN Campaign that I have no idea when I will get to start.  LOL
So rolling away I get:
Colony Organization: Independent Colony, self-sufficient
Colony Size: Colony
General Alignment: Unprincipled
Trade Policies: No questions asked!
Environment Around the Colony: Mixed forest
Notable/Special Natural Resource: Big Game Hunting
Buildings/Facilities: I'll roll for these later
Medical Facility: Small Hospital
Primary Source of Energy: Solar
Primary Source of Transportation: Animals
Security/Fighting Force: Colonial Soldiers
Outside Threats: Raiders
All right that's a start let me go fiddle with this a bit.
More to come...  : )
Posted by Brutorz Bill at 3:38 PM