I got together with some friends today and we wound up playing an impromptu session of Mutant Future. They had never played it (or any P.A. RPG for that matter) before and after looking through my books wanted to give it a try (I think it was the Spider Goats that convinced them).  We only had a couple of hours to play, all of us having family stuff to do, but in that short time they got their characters made up, gear bought and while they were buying gear, I randomly rolled up the mutie monster for the evening's encounter.  (Bless you Metamorphica!) and they overcame the beast, it was a jam-packed fun couple of hours!
Anyways here's the session log!
Mutant Future Session 1

They both had a great time and so did I, afterwards I had to ask myself, why has it been so long since I've played Mutant Future, heck this blog was basically founded on a bunch of Mutant Future posts, I know part of it was finding players, most folks around here prefer Fantasy, but I think after today I won't have a problem getting some players for it, they definitely want to play it again!

Books Used for this session:
Mutant Future, The Metamorphica 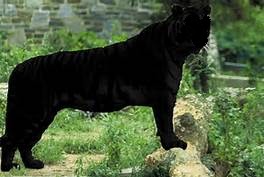 
No. Enc. : 1(1d3)
Alignment : Neutral
Movement : 150'(50)
Armor Class : 6
Hit Dice : 6
Attacks : 3 (2 claws, 1 bite) + rake*
Damage : 1d6/1d6/2d6  *Rake: if the bite attack is successful, the shadow blast tiger can make two rake attacks with its hind legs. Each attack gains an additional +3 bonus to hit and inflicts 1d4+2 damage.
Save : F4
Morale : 9
Hoard Class: VI
Mutations: Featureless Face (can use senses normally but has no visible eyes or nose), Shadow Walk (the mutant may step into one patch of darkness and step out of another (60' range), Exploding Sphere (can create a small hot exploding sphere that can be moved up to 30' away, the blast has a 40' radius (6d6 damage) and the mutant can delay the blast for 5 rds., useable 2x per day), Light Sensitivity (full daylight blinds the mutant, but it can see normally in dim lighting, attacking bright campfires or similar cause it to be -2 to attacks)
(Extremely stealthy like a natural tiger, in dark shadowy surroundings they surprise opponents with a roll result of 1-4 on 1d6.)
The Shadow Blast Tiger is a fearsome shadowy mutant beast of the ruins, usually found in warm climates but at times can be found in unexpected places looking for prey.  They are most active at dusk or sometimes very early dawn (if a cave is nearby) they sleep during the day in dark ruins and caves. They are usually solitary, but sometimes a mated pair with a young cub will be encountered.  While not intelligent enough to always make the most of their Exploding Sphere mutation, they are cunning beasts and will use it to soften up targets or to cover their retreat should things turn against them.