The Battle with Forth Ed!

The culminating battle from the C&C Campaign I ran awhile ago. After tracking a particularly nasty Troll known as "Forth Ed", in the wee hours of the morning our party finally found him at the sight of a caravan that he had just massacred. The brave halfling knight Sir Bungo and the dwarf fighter Glorin move up to engage the enormous Troll. Meanwhile the other party members move into position. 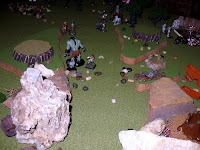 Using strategy, tactics and alot of luck the party press the battle! Tally the druidess unleashes a swarm spell that distracts the troll and hinders his regeneration. While Petra the gnome cleric moves about healing the wounded. 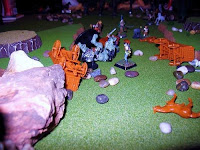 Somehow, they manage to bring the troll down, but the fights not over, he's regenerating! 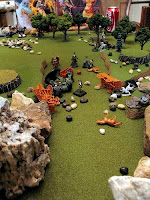 As a new day dawns, they quickly set fire to the troll, emptying every flask of oil they have, daring to not pause for a minute, they are all battered and exhausted, if he is allowed to get up, they may not survive another round.

The party is victorious!!! Somehow they have managed to defeat this horrific opponent!

The bards will long sing of this glorious battle!!