Anyone need a little healing?? 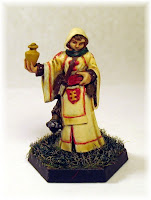 Here's a couple of clerics. You never know when your gonna need a bit of healing after a hard day of dungeon crawling. The current campaign has involved alot of work for the Church of Pelor and recently the Church of The Raven Queen, so I'm sure these minis will see alot of use.

Originally the male cleric mini was used by Don to represent his character in a Castles & Crusades Campaign I ran for awhile ...Well actually it represented two of his characters. Brother Thomas and then when he died Brother Thomas' brother Brother...oh now I'm getting confused. Anyway both are Reaper miniatures painted by Don Moss.